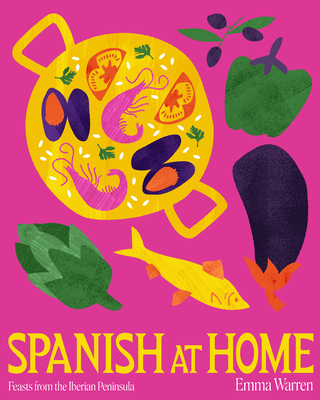 
On Our Shelves Now at:
Discover the best-loved dishes of Spanish home-cooking.

Away from the tapas bars and eateries of Spain’s bustling cities, you’ll find another world of Spanish cuisine. From the inland mountainous regions and fiercely independent provinces of Basque Country and Catalonia, to the glittering coastlines of the Mediterranean and across to the Balearic Islands, Spanish at Home invites you into the heart of Spanish kitchens, to celebrate the dishes that the locals love to cook.

Learn about the stories behind some of Spain’s most loved food and cook according to your mood, whether you’re after a summer fiesta, an Iberian brunch, winter comforts, or sweet dulces. Put together share plates of stuffed mussels and patatas bravas; gather around a roast chicken with chorizo stuffing or duck with roasted cherries; prepare a tomato or a pan-fried goat’s cheese salad for a balmy night; or fire up the barbecue and cook sardines over an open flame or wrap baby leeks in newspaper for a true Spanish experience.

Whether you’re looking to learn new and little-known recipes rarely seen outside of Spain, or you’re a seasoned Mediterranean cook, Spanish at Home shares the best of what this unique cuisine has to offer.
Emma Warren studied horticultural science before transferring her love of the veggie patch to the kitchen. She moved to Spain in 2001 and immersed herself in the world of Spanish cuisine.

Emma soon became head chef of Kasparo, the popular café, which she ran for three years before returning home to Melbourne, Australia, to set up the kitchen Hogar Español at the iconic Spanish Club – a cult institution and live-music venue.

Returning to Barcelona, Emma ended up at Hotel Rey Don Jaime in the coastal town of Castelldefels, which became a major training ground for learning traditional Spanish cooking. Today in Melbourne, she works with some of Australia’s most-respected chefs.

Emma is the author of The Catalan Kitchen and Islas. This is her third cookbook.