Confessions of a Barbarian: Selections from the Journals of Edward Abbey, 1951 - 1989 (Paperback) 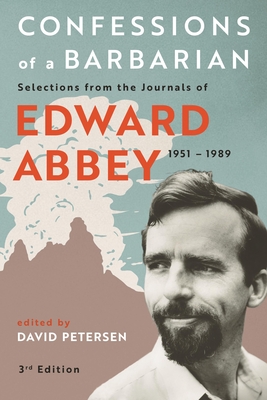 Confessions of a Barbarian: Selections from the Journals of Edward Abbey, 1951 - 1989 (Paperback)


Not On Our Shelves—Ships in 1-5 Days
These eloquent meditations, philosophical musings, and whimsical doodles offer us the clearest window into the soul of this American literary legend. Few have cared more about American wilderness than the irascible Cactus Ed. Author of eco-classics such as The Monkey Wrench Gang and Desert Solitaire, Edward Abbey reveals all his rough-hewn edges and passionate beliefs in this witty, outspoken, maddening, and sometimes brilliant selection of journal entries that takes the writer from his early years as a park ranger and would-be literary author up to his death in 1989. Everything is here: the acute wit, the searing cynicism, and the lyrical, effortless prose. This new edition features an interview with his friend and editor David Petersen in which Abbey speaks candidly about his own work, his approach to writing, and technique. Original sketches made by Abbey himself and a detailed index are also included.
When Edward Abbey died in 1989 at the age of sixty-two, the American West lost one of its most eloquent and passionate advocates. Through his novels, essays, letters and speeches, Edward Abbey consistently voiced the belief that the West was in danger of being developed to death, and that the only solution lay in the preservation of wilderness. Abbey authored twenty-one books in his lifetime, including Desert Solitaire, The Monkey Wrench Gang, The Brave Cowboy, and The Fool's Progress. His comic novel The Monkey Wrench Gang helped inspire a whole generation of environmental activism. David Petersen has been a Marine Corps helicopter pilot, a college writing instructor, magazine editor and author of a dozen nonfiction books. Starting in 1980, David and his (late) wife Carolyn made their home in the rural San Juan Mountains near Durango, where they hand-built the cabin David still lives in today. An internationally acclaimed hunting ethicist and conservationist, David is the recipient of numerous awards.