The Slow Road to Tehran: A Revelatory Bike Ride Through Europe and the Middle East (Hardcover) 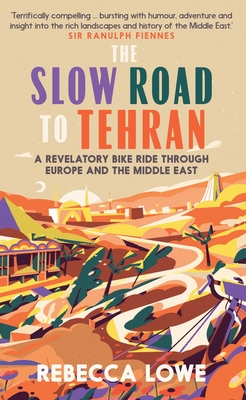 The Slow Road to Tehran: A Revelatory Bike Ride Through Europe and the Middle East (Hardcover)

ONE WOMAN, ONE BIKE AND ONE RICHLY ENTERTAINING, PERCEPTION-ALTERING JOURNEY OF DISCOVERY.

In 2015, as the Syrian War raged and the refugee crisis reached its peak, Rebecca Lowe set off on her bicycle across the Middle East. Driven by a desire to learn more about this troubled region and its relationship with the West, Lowe's 11,000-kilometre journey took her through Europe to Turkey, Lebanon, Jordan, Egypt, Sudan, the Gulf and finally to Iran. It was an odyssey through landscapes and history that captured her heart, but also a deeply challenging cycle across mountains, deserts and repressive police states that nearly defeated her. Plagued by punctures and battling temperatures ranging from -6 to 48C, Lowe was rescued frequently by farmers and refugees, villagers and urbanites alike, and relied almost entirely on the kindness and hospitality of locals to complete this living portrait of the modern Middle East. This is her evocative, deeply researched and often very funny account of her travels - and the people, politics and culture she encountered. 'Terrifically compelling ... bursting with humour, adventure and insight into the rich landscapes and history of the Middle East. Lowe recounts the beauty, kindnesses and complexities of the lands she travels through with an illuminating insight. A wonderful new travel writer.' Sir Ranulph Fiennes
Rebecca Lowe is a freelance journalist from London who specialises in human rights and the Middle East. During her career, Rebecca has written for publications including the BBC, Guardian, Independent, Huffington Post, Economist, Sunday Times Magazine, Daily Mail, Evening Standard and the Spectator. Rebecca has a BA in English Literature from Cambridge University and an MA in Journalism from Stanford University, where she was awarded a scholarship. @reo_lowe