Trial of the Mannings (Hardcover) 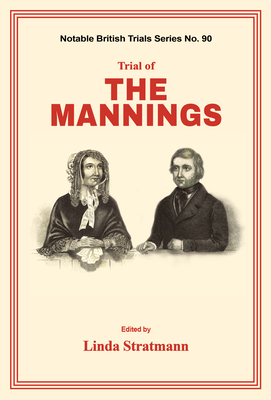 Trial of the Mannings (Hardcover)

The crime of Frederick and Maria Manning in 1849 has all the elements of a classic; the brutal cold-blooded murder of a friend for money, the discovery of a buried decomposing corpse, the escape of the couple and dramatic pursuit and capture by the police. It was a national sensation which culminated in the last public double hanging of a husband and wife, an event which shocked Charles Dickens and played a part in the later abolition of public executions. But one mystery remains - both Frederick and Maria asserted their innocence, each claiming that the other alone was guilty. Was either of them telling the truth? This new examination of the case offers a compelling resolution.

LINDA STRATMANN is the author of thirteen non-fiction books mainly about crime, notably The Secret Poisoner which chronicles the efforts of science and the law to tackle poison murder in the nineteenth century. Her work also includes Chloroform, the Quest for Oblivion, a history of the use and misuse of chloroform, and three biographies, in particular, her acclaimed The Marquess of Queensberry: Wilde's Nemesis. Linda also writes two fiction series. The Frances Doughty Mysteries are set in 1880s Bayswater, with a clever and determined lady detective, who has to battle both wily criminals and prejudices about suitable roles for women. These adventures explore aspects of Victorian life such as diet, education, medicine, women's rights, fear of premature burial and the fashion for cycling. The Mina Scarletti Mysteries, set in 1870s Brighton, feature a deceptively diminutive lady with a twisted spine, whose boldness and confidence enable her to overcome her apparent disadvantages. Mina writes horror and ghost stories and exposes the activities of fraudulent spirit mediums who prey on the vulnerable bereaved. Linda has been a member of the Crime Writers' Association since 2004 and Chair from 2019-2021. She lives in London with her husband. www.lindastratmann.com