Fox Magic: Handbook of Chinese Witchcraft and Alchemy in the Fox Tradition (Paperback) 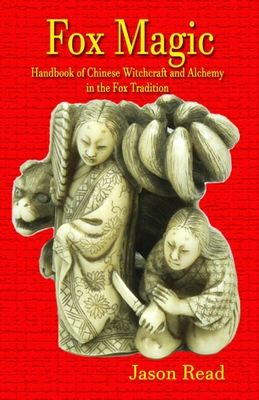 Fox Magic: Handbook of Chinese Witchcraft and Alchemy in the Fox Tradition (Paperback)

According to ancient legends, thousands of years ago a mysterious being known as the Nine Tail Fox taught her devotees the secrets of witchcraft and alchemy. This witch cult survives to this day and is practiced in many Chinese and Japanese communities in relative secrecy.

From her origins with the ancient Wu Shamans and the Tantric dakinis, the author explores this unique and often overlooked form of witchcraft.

Learn the history of the Fox Immortal and her influence on Asian politics and history. Investigate the Tantric origins of the Fox Goddess.

Learn the secret rituals from the Chinese grimoires that invoke the help and aid of the Fox Immortal as a personal magical tutor.

Learn the ways of glamour and fascination taught to devotees of the Fox Temple. Investigate the mysterious tantric rites of the Tachikawa Ryu.

Investigate the Mysteries of the white branch of death and the red branch of sexuality.

Learn some of the many spells used by the Fox cult of witches.

This may be a topic wholly new to the average western reader though it will have familiar elements, after all, all true Mysteries in the true sense of the word have a common thread.

Some readers may be familiar with the Lady Fox from various pop-cultural references in Japanese anime or Hong Kong movies and even video games. It is Kitsune, the fox spirit of the west that is most accessible to the average western audience.

However the cultus of the Fox goes far further back than her appearance in Japan and Korea, her roots seemingly going as far back as the ancient tantric mysteries of India.

I am a practitioner in the magical tradition of Taoism and it was in China that I learned the basics of the Fox Fairy as she is sometimes called. However China is a very conservative country and it seems obvious to me that a lot was implied but never spoken of, or perhaps even forgotten.

I ventured into the depths of the mysteries of the Fox Lady and the path took me in many directions and through many synchronicities on that journey.

While I preserve the fox tradition as passed to me, I do add some further material, also based on traditions that connect with her 'sadhana' glossary]. I expect there will be an outcry from some Taoist and Shingon purists since in a sense I am resurrecting the heterodox Shingon cult of the Tachikawa. The logic of this decision will become clear. I am certain this is the correct move.

In this way, we rise above the apparent shallowness of the Fox Temple as seen in contemporary Hong Kong for example, where the Fox Fairy has merely become a means to become a more attractive person in the world of film and music.

In this book, I am giving the keys to true gnosis of the Path of the Nine-Tailed Fox.