Wars and Soldiers in the Early Reign of Louis XIV: Volume 5: The Portuguese Army 1659-1690 (Century of the Soldier) (Paperback) 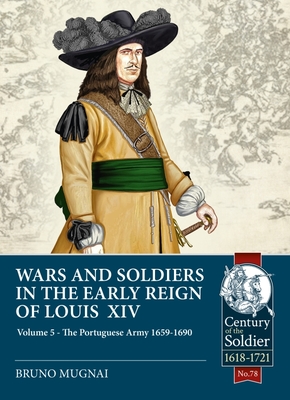 Wars and Soldiers in the Early Reign of Louis XIV: Volume 5: The Portuguese Army 1659-1690 (Century of the Soldier) (Paperback)


Special Order—Subject to Availability
In December 1640, the native dynasty of Braganza ascended to the Portuguese Throne. This event heralded the end Spanish domination in Portugal that had started in 1580.

Following the Restoration, an ill-prepared Portuguese David found itself having to face a tormented but not exhausted Spanish Goliath. The new national army was raised in a such a short period of time, to be considered almost unique in European military history. The development of Portugal's armed forces during this period is a fascinating subject for investigation and reading.

The story of Portuguese army during this period, its organization, and campaigns, together with a study of its uniforms and ensigns is published here in English for the first time. The book is presented with 8 special commissioned color plates and uses after archival and unpublished sources along with many contemporary pictures.