On the Suffering of the World (Paperback) 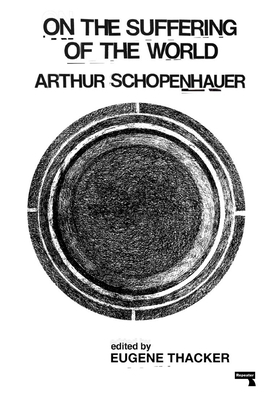 On the Suffering of the World (Paperback)


On Our Shelves Now at:
On the Suffering of the World is a collection of the later aphoristic writings of Arthur Schopenhauer, known for their incisive, aphoristic style and dark, pessimistic view of human existence.

Edited and with an introduction by Eugene Thacker, On the Suffering of the World comprises a core selection of Schopenhauer's later writings, gathered together for the first time in print.

These texts, produced during the last decades of Schopenhauer's long life, reveal a unique kind of philosophy, expressed in a singular style. Eschewing the tradition of dry, totalizing, academic philosophy prevalent during the time, Schopenhauer's later writings mark a shift towards a philosophy of aphorisms, fragments, anecdotes and observations, written in a literary style that is by turns antagonistic, resigned, confessional, and filled with all the fragile contours of an intellectual memoir. Here Schopenhauer allows himself to pose challenging questions regarding the fate of the human species, the role of suffering in the world, and the rift between self and world that increasingly has come to define human existence, to this day. It is these writings of Schopenhauer that later generations of artists, poets, musicians, and philosophers would identify as exemplifying the pessimism of their era, and perhaps of our own as well.

On the Suffering of the Worldis presented with an introduction that places Schopenhauer's thought in its intellectual context, while also connecting it to contemporary concerns over climate change, the anthropocene, and the spectre of human extinction. The book also includes a bibliography and chronology of Schopenhauer's life.
Arthur Schopenhauer (1788-1860) was a German philosopher, known for his book The World as Will and Representation. Though he never accepted such labels, his philosophy is known for its pessimistic view of existence in general, and for its misanthropy regarding human beings in particular. Influenced by Western thinkers such as Immanuel Kant and Meister Eckhart, he was also deeply influenced by classical Indian, Buddhist, and Chinese philosophies, and is one of the first Western thinkers to have undertaken a genuinely comparative philosophy. In the last years of his long life, he enjoyed playing the flute, walking his dog, and grumbling under his breath.

Eugene Thacker is the author of several books, including In The Dust of This Planet (Zero Books, 2011) and Infinite Resignation (Repeater Books, 2018). He is Professor at The New School in New York City.
"Thacker’s introductory essay insightfully sketches the biographical and intellectual context of Schopenhauer’s distinctly zestful reflections on the vanity of life, the fear of death and humankind’s place in the universe." - The Washington Post

"Schopenhauer’s reputation as the bard of pessimism makes him the perfect philosopher for the Covid era, Thacker argues in his foreword to these aphoristic late essays." - New York Times, New & Noteworthy