She’s a Rainbow: The Extraordinary Life of Anita Pallenberg (Paperback) 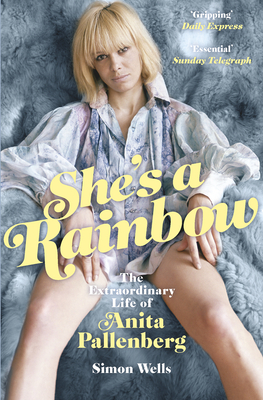 She’s a Rainbow: The Extraordinary Life of Anita Pallenberg (Paperback)


Not On Our Shelves—Ships in 1-5 Days
"How Anita came to be with Brian is really the story of how the Stones became the Stones. She almost single-handedly engineered a cultural revolution in London by bringing together the Stones and the jeunesse dorée…The Stones came away with a patina of aristocratic decadence that served as a perfect counterfoil to the raw roots blues of their music. This…transformed the Stones from pop stars into cultural icons." —Marianne Faithfull

Pallenberg epitomised the hedonistic counter-culture world of sex, drugs, and rock 'n' roll during the sixties and seventies; muse to the Rolling Stones and star of enduring cult movies like Barbarella and Performance, this is Anita's incredible story of excess, art, motherhood, and her often unknown influence on one of the greatest rock bands of all time.
Simon Wells has written on film and music for numerous magazines and newspapers including the Guardian; The Times, and The Independent. He is a regular contributor to Record Collector, Hotdog, TV Zone, Watch, Total Film, and the Beatles' Book; the group's official magazine. In addition to his writing credits, Simon has researched numerous projects for the likes of the BBC, Channel Four, and Virgin, as well as broadcasting live on LBC, ITN, and BBC on film and music.