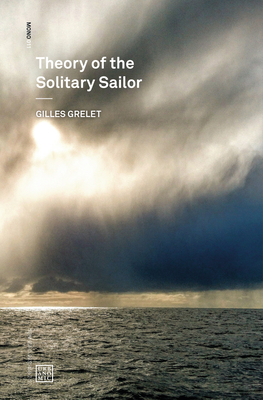 
Not On Our Shelves—Ships in 1-5 Days
Grelet's solitary sailor is a radical theoretical figure, herald angel of an existential rebellion against the world and against philosophy's world-thought.

Over a decade ago, Gilles Grelet left the city to live permanently on the sea, in silence and solitude, with no plans to return to land, rarely leaving his boat Théorème. An act of radical refusal, a process of undoing one by one the ties that attach humans to the world, for Grelet this departure was also inseparable from an ongoing campaign of anti-philosophy. Like François Laruelle's "ordinary man" or Rousseau's "solitary walker," Grelet's solitary sailor is a radical theoretical figure, herald angel of an existential rebellion against the world and against philosophy's world-thought, point zero of an anti-philosophy as rigorous gnosis, and apprentice in the herethics of navigation.

More than a set of scattered reflections, less than a system of thought, Theory of the Solitary Sailor is a gnostic device. It answers the supposed necessity of realizing the world-thought that is philosophy (or whatever takes its place) with a steadfast and melancholeric refusal. As indifferently serene and implacably violent as the ocean itself, devastating for the sufficiency of the world and the reign of semblance, this is a lived anti-philosophy, a perpetual assault waged from the waters off the coast of Brittany, amid sea and wind.
Formerly a skipper and trainer of sailing instructors in the Glénan Islands, Gilles Grelet has lived aboard his boat since 2010. He is the author of Déclarer la gnose: D'une guerre qui revient à la culture, Le théorisme, méthode de salut public, and Citations pour le président Sarkozy (with Juan Pérez Agirregoikoa), and editor of the collection Théorie-rébellion: Un ultimatum.