The Battle of Glenshiel: The Jacobite Rising in 1719 (Century of the Soldier #19) (Paperback) 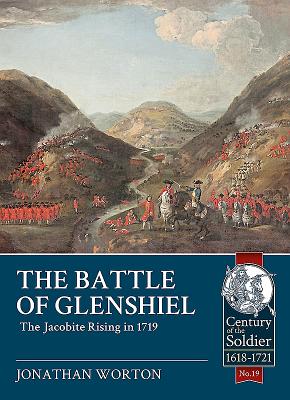 The Battle of Glenshiel: The Jacobite Rising in 1719 (Century of the Soldier #19) (Paperback)


Special Order—Subject to Availability
Glenshiel: The Jacobite Rising in 1719 takes a fresh view of this curious and remarkable, but part-forgotten engagement. It was fought on 10 June 1719, during the long daylight hours of a summer evening in the mountainous western Highlands of Scotland. Glenshiel was the main and decisive engagement of the 1719 Jacobite rising, the fourth attempt by supporters in Scotland to restore the exiled house of Stuart to the throne of the Kingdom of Great Britain and Ireland. Led by a disunited group of clan chieftains and Scots notables returned from Continental exile, the Highlanders forming most of the Jacobite army at Glenshiel opposed forces of the government of King George I. These included regular soldiers of the British Army, as well as contingents of Highlanders loyal to the Georgian regime.

With Scots fighting on both sides, the 1719 rising was on one hand a civil war, a continuation of the Jacobite wars, a protracted period of intermittent political and armed conflict affecting the British Isles from the late seventeenth to the mid-eighteenth centuries; and on the other hand was an extension of the wider European war of the Quadruple Alliance, ranging the powers of Great Britain, France, the Netherlands and Imperial Austria against Spain. For these reasons a battalion of white-coated Spanish infantry fought beside Jacobite clansmen at Glenshiel, while there were Dutch infantrymen in the opposing ranks of the government army.

Historians have paid much less attention to the 1719 rising than to the much better-known rebellions of 1715-16 and 1745-46. Indeed, the fullest account of the 1719 rising was published as long ago as 1895. Glenshiel: The Jacobite Rising in 1719 therefore takes a new and long overdue view of the subject. The background and course of the rising is considered in detail, making use of published and archival sources to reconstruct the likely course of events. Chapters on the leading figures, and on the opposing armed forces, place the battle of Glenshiel within the contexts of the Jacobite period, and of early eighteenth-century European warfare.

Extensively illustrated, including specially commissioned artwork, Glenshiel: The Jacobite Rising in 1719 will appeal to readers drawn to the Jacobite period and to early eighteenth-century military history, to readers generally interested in Scottish and British history, and to the particular interests of model makers, wargamers and living history enthusiasts.