Quest for Adventure: Remarkable Feats of Exploration and Adventure (Paperback) 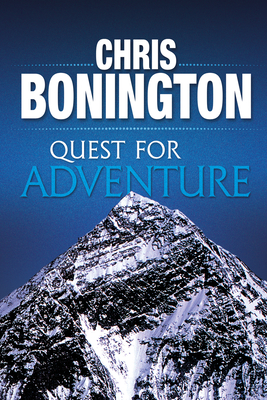 Quest for Adventure: Remarkable Feats of Exploration and Adventure (Paperback)

Quest for Adventure is a collection of stories written by Sir Chris Bonington looking at the adventurous impulse which has driven men and women to achieve the impossible in the face of Earth's elements: crossing its oceans, deserts and poles; canoeing its rivers; climbing its mountains, and descending into its caves.

Bonington selects seventeen of the most thrilling expeditions and adventures of the second half of the twentieth century, uncovering the common thread that drives men and women to achieve the impossible. Following a new preface, he charts such outstanding achievements as the Kon-Tiki voyage; Francis Chichester's round-the-world tour in his boat Gipsy Moth IV; the race for the first non-stop circumnavigation of the globe under sail; and Ice Bird's sail around Antarctica.

Away from the ocean, the travels of one of the world's most outstanding desert explorers, Wilfred Thesiger, are detailed, journeying through what is menacingly called the Empty Quarter. Bonington returns to familiar ground as he writes about some exceptional mountain adventures, including the 1970 ascent of the South Face of Annapurna, the first ascent of Everest, Reinhold and Gunther Messner on Nanga Parbat, Andy Cave's triumph and tragedy on Changabang, and the first ascent of The Nose of El Capitan in Yosemite. Wally Herbert's team crossing of the Arctic Ocean and the equally gruelling Fuchs/Hillary crossing of Antarctica are written about in detail.

More recent adventures include two remarkable flights: the circumnavigation of the globe by balloon and microlight. Quest for Adventure concludes with an account of the cave diving epic the Dead Man's Handshake, leaving the reader with a chill in their spine and an appreciation for the natural wonders below the Earth's surface.

Bonington's eloquent writing on a subject in which he is a passionate authority makes for a highly engrossing read for adventurers and armchair explorers alike.

Born in 1934, Chris Bonington - mountaineer, writer, photographer and lecturer - started climbing at the age of sixteen in 1951. It has been his passion ever since. He made the first British ascent of the North Face of the Eiger and led the expedition that made the first ascent of the South Face of Annapurna, the biggest and most difficult climb in the Himalaya at the time. He went on to lead the expedition that made the first ascent of the South-West Face of Everest in 1975 and then reached the summit of Everest himself in 1985 with a Norwegian expedition. He has written seventeen books, fronted numerous television programmes and has lectured to the public and corporate audiences all over the world. He received a knighthood in 1996 for services to mountaineering, was president of the Council for National Parks for eight years, and is the non-executive chairman of Berghaus and a chancellor of Lancaster University.