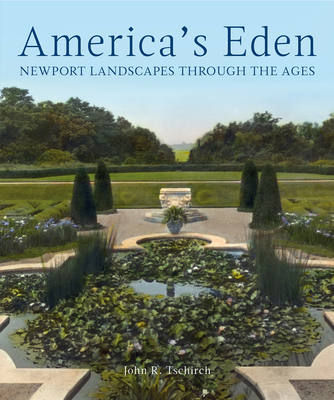 
Not On Our Shelves—Ships in 1-5 Days
In 1789, Jedidiah Morse described Newport and its environs as the "Eden of America" in the First Geography of the United States. America's Eden: Newport Landscapes through the Ages builds on this legendary image of a centuries-old paradise, and establishes Newport as a cultural landscape of national significance.

The comprehensive history from European settlement to the present day is illustrated by a treasure trove of rare period maps, paintings and photographs by prominent artists, and drawings and sketches by leading designers. The book serves as a critical resource guide encompassing landscape architecture, fine art, tree and plant propagation, and the conservation of natural sites. A rich story of art, design and horticulture awaits readers among the gardens, gazebos and trees of Newport.

John R. Tschirch is an award-winning architectural historian and Honorary Member of the Garden Club of America. His career in historic preservation has brought him across the globe to study and teach at cultural heritage sites and landscapes. He has lectured and published widely, presenting conference papers for UNESCO ICOMOS in Buenos Aires and Yale University's Mellon Center in London. John's work in preserving and interpreting historic places has been featured in The New York Times, Conde Nast Traveler, and Martha Stewart Living, and he has appeared on the A&E documentary series, America's Castles. His publications include Newport: The Artful City (2020), "The New Thing at Newport: The Tiffany Glass Wall at Kingscote" in The Magazine Antiques (January 2013), the essay, "Newport Cottages" for The Encyclopedia of New England Culture(2005) and "Newport" in Parisian Palaces of La Belle Epoque (1992). John also writes historical fiction inspired by his globe trekking career, publishing Gods and Girls: Tales of Art, Seduction and Obsession (2019), a collection of short stories about young heroines who encounter works of art and historic places that forever change the course of their lives. For more on John's work, visit his website at www.johnstories.com.