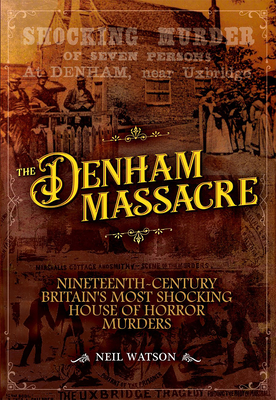 In May 1870, seven members of the Marshall family, including three small children, were found brutally murdered in their home in Denham, Buckinghamshire. They had all been bludgeoned to death with a sledgehammer, an axe and a poker. The crime scene looked like a battlefield or a slaughterhouse. In THE DENHAM MASSACRE, retired Metropolitan police officer Neil Watson provides the first full-length study of this sensational but largely forgotten Victorian murder case. He carefully reconstructs the events leading up to the crimes and their aftermath, and describes in detail the police investigation and the eventual arrest of the suspect John Owen, an armed and dangerous criminal with a long record of petty offending. Following a day-long trial, Owen was convicted of the capital crimes and executed at Aylesbury Gaol by the notorious hangman William Calcraft. The Denham Massacre stands as one of the most shocking and disturbing cases of mass murder in British criminal history. Based on years of original research into the case, and drawing on his experience as a serving police officer, Neil Watson takes us unforgettably to the very heart of a real-life Victorian murder mystery. It is a gripping, provocative read.

Neil Watson was a Metropolitan Policeman for 30 years during the turbulent times of the mid 1970s, ending his career in 2005. He served at Cannon Row, Wembley, Harrow and Pinner Police Stations. Neil has recently retired for a second time from his job as an anti-social behaviour officer in north west London. He has written several articles about police history including the History of Pinner Police Station, as well as a chapter of the book "Discovering More Behind the Blue Lamp, policing central, north and south west London" by Peter Kennison, David Swinden and Alan Moss. The chapter covers the history of all five Harrow police stations. Neil has a passion for all things history. He has also been researching his and friends family history for 25 years.