The Failure of Anarchism (Hardcover) 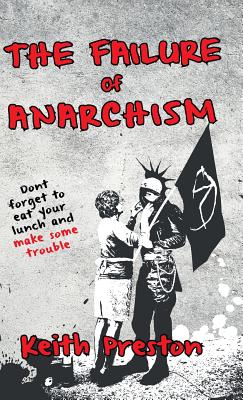 The Failure of Anarchism (Hardcover)

In the late 19th and early 20th century, anarchism was the most feared revolutionary movement in the world. However, by the late 20th century anarchism was eclipsed by the rise of the modern totalitarian states, world wars, and the emergence of technocratic managerial economies. Meanwhile, anarchists have failed to provide alternatives to this dominant form of political economy.

In this work, the anarchist theoretician Keith Preston places the blame for these failures on the shoulders of his fellow anarchists. He criticizes the contemporary anarchist movement for having degenerated into a fashionable youth culture that has lost the ferocity of historic anarchism. Instead, present day anarchists are more likely to serve as the lackeys of political correctness than the vanguard of revolution.

Preston discusses the possibility of new directions for modern anarchists. These include the formation of strategic alliances for the purpose of overthrowing states, ruling classes, and empires by means of the visionary concept of pan-secessionism. He recognizes that anti-state revolutionaries will eventually need to achieve victory through "fourth generation warfare" i.e. an insurgency on the model of groups like Hezbollah or the Peoples War Group.

Further, Preston argues that the social base of anarchism should not be fanciful intellectuals or privileged-class university students. Instead, the foundation of revolutionary struggle should be the "lumpenproletariat" of the permanently unemployed, the dispossessed, the prisoner, the prostitute, and the homeless. Preston subsequently surveys a plethora of trends that provide a basis for anarchist optimism.