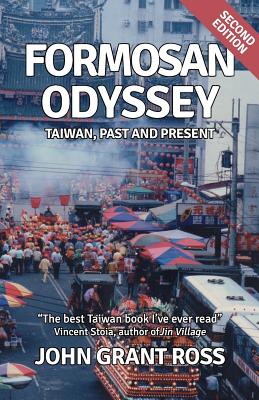 Until the early twentieth century, Taiwan was one of the wildest places in Asia. Its coastline was known as a mariners' graveyard, the mountainous interior was the domain of headhunting tribes, while the lowlands were a frontier area where banditry, feuding, and revolts were a way of life. Formosan Odyssey captures the rich sweep of history through the eyes of Westerners who visited and lived on the island -- from missionaries, adventurers, lighthouse keepers, and Second World War PoWs, to students coming to study martial arts. It finishes with the story of Taiwan's economic miracle, the political transition from police state to vibrant democracy, and its continuing stand-off with China.

The author's travels, made around the island in the wake of the devastating 921 earthquake, and his experiences from five years of living in a small town, provide an intimate picture of modern Taiwan.

The island is a storehouse of Chinese and indigenous cultures, a fascinating mix of the new and the traditional, and likewise Formosan Odyssey is a smorgasbord of delights that both the general reader and any "old Asia hand" will find informative and amusing.