Nashville Then and Now® (Hardcover) 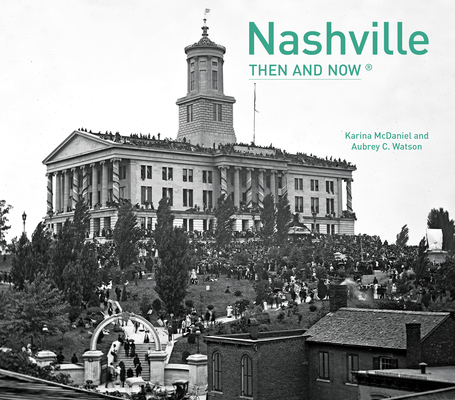 Nashville Then and Now® (Hardcover)


Not On Our Shelves—Ships in 1-5 Days
Originally known as Nashborough, Nashville was named as the capital of Tennessee in 1843. The city’s economic recovery after the Civil War was slow, hampered by two major cholera epidemics. However, the Centennial Exposition of 1897, for which a reproduction of the Greek Parthenon was built, led to the city’s gradual establishment as one of the finest cities in the South.Although Nashville was known as the home of the Maxwell House Coffee empire in the early twentieth century, it was the Grand Ole Opry, established in 1925, that turned the city into a major country music venue. Using some extraordinary images from the city’s past, paired with the same views today, Nashville Then and Now shows how the city has evolved into a bright, modern city that is synonymous with country music.Locations include: State Capitol, Hotel Hermitage, Maxwell House Hotel, Ryman Auditorium, Union Street, James K. Polk Home, Germantown, Watson House, Woodland Street Bridge, Broad Street, Union Street, Market Street, Customs House, Union Station, Fisk University, Country Music Hall of Fame, the Parthenon, Tennessee Centennial, Vanderbilt University, Hillsboro Turnpike, Fort Negley, East Bank.
Karina McDaniel came to Tennessee from her native Germany by way of Brazil and Waterloo, Alabama. Since 1995, she has worked as an archivist for the Tennessee State Library and Archives, specializing in the restoration, reproduction, and preservation of historic photographs and documents. Her work has been published in many books, including Tennessee and the Great Smokies, The World of Stereographs, and Nashville: City of Note.