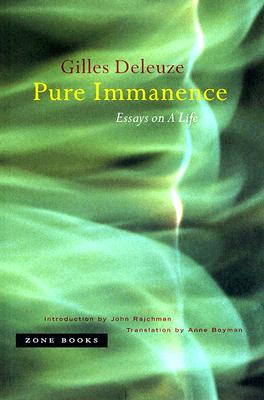 Essays by Gilles Deleuze on the search for a new empiricism.

The essays in this book present a complex theme at the heart of the philosophy of Gilles Deleuze, what in his last writing he called simply a life. They capture a problem that runs throughout his work--his long search for a new and superior empiricism. Announced in his first book, on David Hume, then taking off with his early studies of Nietzsche and Bergson, the problem of an empiricist conversion became central to Deleuze's work, in particular to his aesthetics and his conception of the art of cinema. In the new regime of communication and information-machines with which he thought we are confronted today, he came to believe that such a conversion, such an empiricism, such a new art and will-to-art, was what we need most. The last, seemingly minor question of a life is thus inseparable from Deleuze's striking image of philosophy not as a wisdom we already possess, but as a pure immanence of what is yet to come. Perhaps the full exploitation of that image, from one of the most original trajectories in contemporary philosophy, is also yet to come.

Nuriye Nalan Sahin-Hodoglugil, M.D., M.P.H., M.A., is affiliated with the Hacettepe University School of Medicine, Public Health Department, Ankara, Turkey, and also with the Bay Area International Group, at the University of California, School of Public Health. She is the author of recent articles in Contraception and Sexually Transmitted Infections.