The Queen of Portland's Roses: The Life of Georgiana Burton Pittock (Paperback) 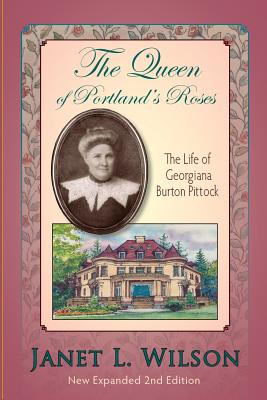 The Queen of Portland's Roses: The Life of Georgiana Burton Pittock (Paperback)


Not On Our Shelves—Ships in 1-5 Days
(This book cannot be returned.)
Georgiana Burton Pittock was a remarkable woman whose good deeds are legendary. Charitable organizations she founded, to ease the life of Oregon pioneers, still exist today, more than one hundred years later.But her other contribution may be even more widely appreciated. Without doubt, she's The Queen of Portland's Roses. Georgiana gave Portland its city identity-without her, there would be no City of Roses, no Rose Festival and no citywide fascination with anything "rose." She introduced in Oregon the idea of rose competitions and even held rose "festivals" right in her own yard. Georgiana Pittock was a true pioneer, having crossed the Oregon Trail as a child. In Portland, she met and later married Henry Pittock, owner of The Oregonian newspaper. They raised a family and built their dream home high on a hill overlooking downtown Portland. Now known as Pittock Mansion, it's Oregon's beloved house museum and a star locale for Hollywood movies.
Janet L Wilson served for many years on the board of the Pittock Mansion Society as historian. From Oregon Trail pioneer stock herself, she has long been fascinated by that era in Portland, Oregon history and enjoys nothing better than hours spent delving through dusty archives, preserving photographs and other memorabilia from that generation. The independent spirit of Georgiana Pittock has lured her into a long-time study of Pittock family history, so that even family members laughingly concede that she knows far more about their ancestors than they could ever hope to! Her wide historical knowledge of the period lends a richness to her writing and her love of the very human side of history gives warmth and life to her work.