The London Hanged: Crime And Civil Society In The Eighteenth Century (Paperback) 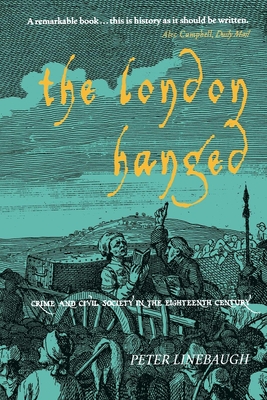 The London Hanged: Crime And Civil Society In The Eighteenth Century (Paperback)


Not On Our Shelves—Ships in 1-5 Days
Peter Linebaugh’s groundbreaking history has become an inescapable part of any understanding of the rise of capitalism. In eighteenth-century London the spectacle of a hanging was not simply a form of punishing transgressors.

Rather it evidently served the most sinister purpose—for a prvileged ruling class—of forcing the poor population of London to accept the criminalization of customary rights and the new forms of private property. Necessity drove the city’s poor into inevitable conflict with the changing property laws, such that all the working-class men and women of London had good reason to fear the example of Tyburn’s Triple Tree.

In this new edition Peter Linebaugh reinforces his original arguments with responses to his critics based on an impressive array of historical sources. As the trend of capital punishment intensifies with the spread of global capitalism, The London Hanged also gains in contemporary relevance.
Peter Linebaugh is Professor of History at the University of Toledo. He writes extensively on British history, Irish history, labor history and the history of the colonial Atlantic. His books include The Magna Carta Manifesto, The Many-Headed Hydra and The London Hanged, and he contributes frequently to CounterPunch.
“A bold, sweeping and provocative book ... it offers the most engrossing and stirring slice of London’s history to have appeared in a long time.”—Times Higher Educational Supplement

“A remarkable book ... this is history as it should be written.”—Alec Campbell, Daily Mail