The End of Print: The Grafik Design of David Carson (Paperback) 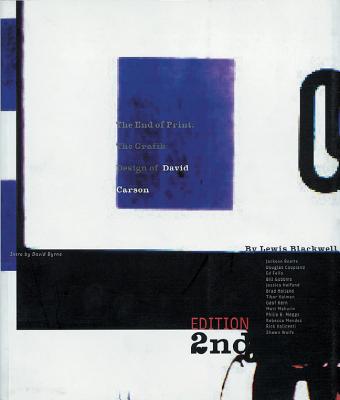 The End of Print: The Grafik Design of David Carson (Paperback)

By David Carson (By (artist)), Lewis Blackwell (Text by), David Byrne (Introduction by)


Special Order—Subject to Availability
The End of Print is the definitive statement of the work of the great iconoclast designer, David Carson. In print for the first time in several years, this classic book has itself become part of the history of graphic design. It features work from the magazines where Carson first made his mark including Transworld Skateboarding, Surfer, Beach Culture and Ray Gun—as well as his instantly recognizable advertisements for clients such as Nike, Pepsi, MTV and Sony. Lewis Blackwell's text includes an interview in which Carson examines the origins of his approach and discusses the extreme reactions to his work.
Lewis Blackwell is head of creative direction at Getty Images. Formerly publisher and editor of Creative Review he is the author and editor of numerous critically acclaimed books including David Carson: 2ndsight, with Neville Brody G1, and with Chris Ashworth Soon: The Future of Brands. A regular writer and commentator on graphic design and typography advertising film video and multimedia, Blackwell lectures and chairs awards juries internationally.

David Carson has been described as the most influential graphic designer working today. He directs commercials and short films and lectures internationally. Carson was awarded "best use of design and photography" from the International Center for Photography, New York. Newsweek magazine said Carson "changed the face of graphic design". Carson's previous publications include The End of Print: The Graphic Design of David Carson and David Carson: 2ndsight, a winner of the 77th Annual Art Directors Awards.