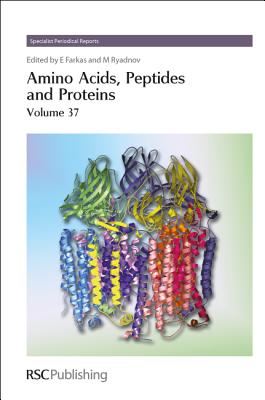 Amino Acids, Peptides and Proteins comprises a comprehensive review of significant developments at this biology/chemistry interface. Each volume of this Specialist Periodical Report opens with an overview of amino acids and their applications.

Volume 37 marks the return of the series after a five-year hiatus, with Professors Etelka Farkas (Debrecen, Hungary) and Max Ryadnov (National Physical Laboratory, UK) as the new volume editors. There has been considerable progress in the field since the last publication in 2007, and predominantly this volume looks back over the last two year rather than the usual 12-months. However, traditional concepts are also revisited in the context of recent discoveries.

Each chapter incorporates current trends of the reviewed topic and the authors' outlook of future perspectives. This is to facilitate the monitoring of the covered areas and their potentianl expansion with the inclusion of other specialist reports in subsequent volume. All chapters are compiled by leading researchers in their subject areas which offers this series as an appealing source of information for the research community in both academia and industry.

Max obtained his PhD from Lomonosov Moscow State University and Russian Academy of Sciences in 2000. After a postdoctorate in Sussex, he pursued independent academic research in Bristol and Leicester before joining NPL as a principal research scientist in 2010 where he is currently a science area leader for Biotechnology. Max holds a joined academic appointment with the University of Edinburgh and is a Fellow of the Royal Society of Chemistry. Professor Etelka Farkas is based in the Department of Inorganic and Analytical Chemistry at the University of Debrecen, Hungary. Her research interests include the interaction between metal ions and biologically active, hydroxamic acid-based molecules.