The Operating System: An Anarchist Theory of the Modern State (Paperback) 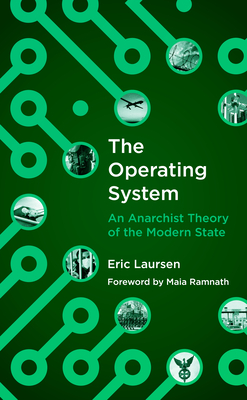 The Operating System: An Anarchist Theory of the Modern State (Paperback)

"By what cunning perversion of logic and history has the modern capitalist State persuaded us that it is the only possible form of polity? Why do we passively accept its claim to inevitability and its lame excuses for the increasingly invasive surveillance of our private lives? How do the already powerful hide short-cuts to even greater influence and wealth across a ruined environment and vast stretches of poverty? In thoughtful, provocative, and engaging reflections on the modern State, Eric Laursen seeks deliberate withdrawal from the self-fulfilling mechanism he so appropriately calls 'the operating system.'" --Michael Herzfeld, Harvard University

"We hear from many quarters that social justice requires a strong and competent State to redress wrongs and advance the interests of oppressed minorities. We also hear it said that the State is dead or nearly so, that it is being drowned in the bathtub of neoliberal capitalism. Eric Laursen presents a sobering argument that the modern State has not said its last word, nor have we heard the final word about the oppressive character of the State and the urgent necessity of its abolition. The Operating System is a much-needed patch to the software of anti-authoritarian critique, particularly in its attention to the way that the State and identity-based forms of oppression work together." --Jesse Cohn, author of Underground Passages

"Eric weaves together a rich history of the State, reminding us it is not inevitable and that it is not reformable. Learning to live together without the State is our best chance for the survival of humanity and the planet herself." --Lisa Fithian, author of Shut It Down

Anarchists have fought the State since its inception, but along the paths of liberation in the twenty-first century it's been missing from the conversation. Laursen's engaging exploration revisits ideas of the State, its apparatus of controls, and why we should openly oppose it." --scott crow, author of Black Flags and Windmills

One of the most unique aspects of anarchism as a political philosophy is that it seeks to abolish the state. But what exactly is "the state"? The State is like a vast operating system for ordering and controlling relations among human society, the economy, and the natural world, analogous to a digital operating system like Windows or MacOS. Like a state, an operating system "governs" the programs and applications under it and networked with it, as well as, to some extent, the individuals who avail themselves of these tools and resources. No matter how different states seem on the surface they share core similarities, namely:

Anyone concerned with entrenched power, income inequality, lack of digital privacy, climate change, the amateurish response to COVID-19, or military-style policing will find eye-opening insights into how states operate and build more power for themselves--at our expense. The state won't solve our most pressing problems, so why do we obey? It's time to think outside the state.