HMS Rodney: Slayer of the Bismarck and D-Day Saviour (Warships of the Royal Navy) (Paperback) 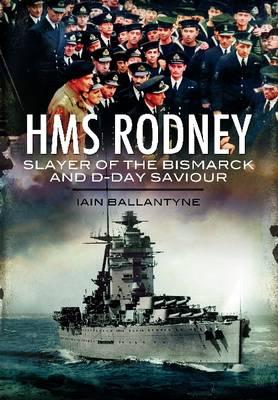 HMS Rodney: Slayer of the Bismarck and D-Day Saviour (Warships of the Royal Navy) (Paperback)


Special Order—Subject to Availability
The Second World War battleship HMS Rodney achieved lasting fame for her role in destroying the pride of Hitler's navy, the mighty Bismarck in a thrilling duel. The Rodney carrying the largest guns ever mounted in a British warship finally succeeded in turning her adversary into twisted metal and so removed a major threat to the Atlantic convoy routes so vital to the survival of the Nation and the war effort.This splendid book traces not only this mighty battleship's career in detail but describes the careers of all the ships carrying the name.