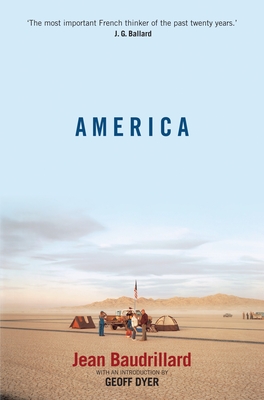 
Special Order—Subject to Availability
From the sierras of New Mexico to the streets of New York and LA by night—”a sort of luminous, geometric, incandescent immensity”—Baudrillard mixes aperçus and observations with a wicked sense of fun to provide a unique insight into the country that dominates our world. In this new edition, leading cultural critic and novelist Geoff Dyer offers a thoughtful and perceptive take on the continued resonance of Baudrillard’s America.
Jean Baudrillard (1929–2007) began teaching sociology at the Université de Paris-X in 1966. He retired from academia in 1987 to write books and travel until his death in 2007. His many works include Simulations and Simulacra, America, The Perfect Crime, The System of Objects, Passwords, The Transparency of Evil, The Spirit of Terrorism, and Fragments, among others.
“Occasionally provocative and almost always infuriating ... America is filled with perceptive, almost poetic observations.”—Rolling Stone

“Since de Tocqueville, French thinkers have been fascinated with America. But when it comes to mysterious paradoxes and lyrical complexity no French intellectual matches Jean Baudrillard in contemplating the New World.”—The New York Times

“A mixture of crazy notions and dead-on insights, America is a valuable (and voluble) picture of what Mr. Baudrillard calls ‘the only remaining primitive society’ ... ours.”—The New York Times Book Review