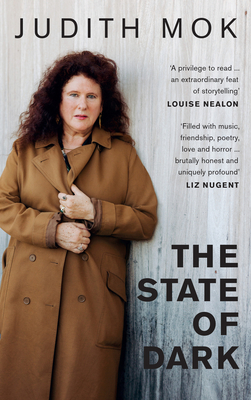 
Coming Soon—Pre-Order Now
Judith Mok was born in Holland to Jewish survivors of the Holocaust. She trained as a classical singer and travelled the world performing as a soloist, while publishing poetry and novels in Dutch.

The State of Dark is a memoir and detective story. Like many children of Holocaust survivors, she was raised with the emotional trauma of having no other family members, while her parents tried to rebuild their lives in postwar Europe. Despite the constant, and occasionally intrusive presence of the past – Anne Frank’s father Otto makes an emotional visit to her father to hand over some letters – she had little concrete information about the hundreds of members of her family who had died. All the same, the Holocaust and its consequences continued to haunt her life.

As a classical singer, she was a student of the great German soprano Elisabeth Schwarzkopf. It was only years later that she discovered the full extent of Scwharzkopf’s collaboration with the Nazi regime. Not only was she a full member of the National Socialist Party, but was also the mistress of Hans Frank, the notorious ‘Butcher of Poland’. There turns out to be a bizarre and horrific coincidence involving Schwarzkopf and some of Mok’s murdered family. A chance phone call made from her Dublin home in search of information, unleashes a whole process whereby Mok disovers, in shocking and intimate detail, the terrible fate of her family.


The State of Dark is a highly original, moving, and beautifully written memoir of the so-called Second Generation trauma, which documents how the Holocaust continues to be a living issue in European life and culture, including in Ireland.

Judith Mok was born in Holland, to Jewish survivors of the Holocaust. She trained as a classical singer and travelled the world performing as a soloist, while publishing poetry and novels in Dutch. For the last twenty years she has been based in Ireland, where she has become the country’s leading voice coach, working with classical singers and international pop stars like Grace Jones, Dermot Kennedy and many others. She started to write in English and has published a novel and a collection of poetry.