Going to Blazes: Further Tales of a Country Fireman (Paperback) 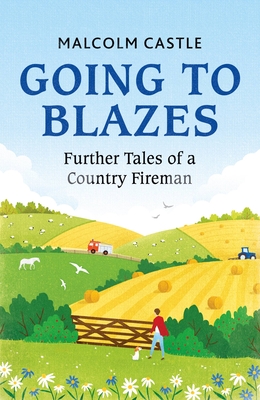 Going to Blazes: Further Tales of a Country Fireman (Paperback)

Tales of a country fireman from Shropshire, by the author of ALL FIRED UP and GREAT BALES OF FIRE. A perfect combination of heroism and nostalgia.

It's 1987 and 26-year-old Malcolm Castle is going up in the world. He's made it through eight long years as a rookie fire-fighter and he's become an accepted member of Red Watch in Shrewsbury. The town's glorious medieval streets and the rolling hills of Shropshire look infinitely peaceful. But Malcolm knows they will always spring plenty of surprises.

In Going to Blazes the endlessly varied nature of Malcolm's work triggers plenty of laughs, as he comes to the aid of different sorts of animals, vehicles and people in difficulty - and sometimes a combination of all three. Some of the most surprising incidents he recalls include a road blocked with 35 tonnes of turnips, and a call-out to a woman stuck between the floorboards of her upstairs bathroom. But he also faces some of the most emotional rescues of his career. Both funny and touching, Malcolm Castle's book is a unique celebration of the glorious English countryside.

Malcolm Castle joined the Shropshire Fire and Rescue Service as a very young 18 year old in 1980. He recently retired after 31 years on Red Watch at Shrewsbury Fire Station. He is the author of ALL FIRED UP and GREAT BALES OF FIRE.

A hugely interesting read, one of those books that you finish and want more. It captures the camaraderie of the crews, their banter and humour and recall some of the more memorable call-outs, some tragic but others the stuff of lasting anecdotes—SHROPSHIRE STAR