The Politics of Immunity: Security and the Policing of Bodies (Hardcover) 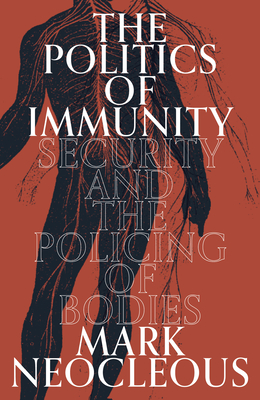 The Politics of Immunity: Security and the Policing of Bodies (Hardcover)

Our contemporary political condition is obsessed with immunity. The immunity of bodies and the body politic; personal immunity and herd immunity; how to immunize the social system against breakdown. The obsession intensifies with every new crisis and the mobilization of yet more powers of war and police, from quarantine to border closures and from vaccination certificates to immunological surveillance.

Engaging four key concepts with enormous cultural weight – Cell, Self, System and Sovereignty – Politics of Immunity moves from philosophical biology to intellectual history and from critical theory to psychoanalysis to expose the politics underpinning the way immunity is imagined. At the heart of this imagination is the way security has come to dominate the whole realm of human experience. From biological cell to political subject, and from physiological system to the social body, immunity folds into security, just as security folds into immunity. The book thus opens into a critique of the violence of security and spells out immunity’s tendency towards self-destruction and death: immunity, like security, can turn its aggression inwards, into the autoimmune disorder.

Wide-ranging and polemical, Politics of Immunity lays down a major challenge to the ways in which the immunity of the self and the social are imagined.
Mark Neocleous is Professor of the Critique of Political Economy at Brunel University London.
“It is difficult to do justice to the breadth and depth of this book. The sheer multidisciplinary variety of insights offered here, ranging from neurology and immunology to psychoanalysis and international law, is frequently dazzling. While the title might lead one to expect it to operate primarily as a conjunctural intervention, it is also a valuable archaeology illuminating various aspects of modern political power.”
—Richard Seymour

“Neocleous’ provocative interventions into the politics of the present is guaranteed to make readers think anew about the body-material and body-politic, our selves as well as sovereignty. He tells a fascinating (and nervous) story.”
—Joanna Bourke

“A masterful survey of one of the key metaphors of our time: the medical biopicture of the body as a battleground, and the extension of this metaphor to the ‘body politic.’ The twin discourses of immunity as a literal feature of organic bodily systems, its counterpart in discussions of sovereignty, warfare, and police power in the terms of the immune system are brought together here in a compelling account grounded in the broader concept of security. The fundamental paradigm of the ‘Self/Non-Self’ as a biopolitical analogy between medical and social bodies is called into question by this incisive critique.”
—W. J. T. Mitchell, author of Cloning Terror: The War of Images, 9-11 to the Present

“In this scholarly and wide-ranging engagement with one of the most topical issues of our time, Neocleous provides both an informative history of the idea of immunity and an astute analysis of the concept itself and its interweaving usage in medical, legal and social contexts. But what is most distinctive and revealing in his study is the axis around which it is shown to revolve: the imbrication of immunity and security concerns, and their mutually reinforcing political logics.”
—Kate Soper