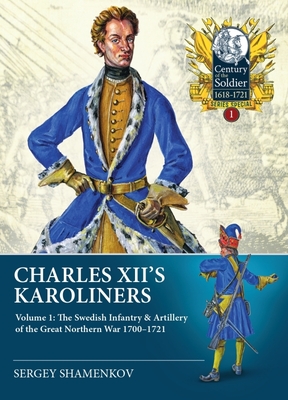 
Special Order—Subject to Availability
This book examines the evolution and changes in Swedish infantry and artillery uniforms during the Great Northern War.
The author reconstructs in detail the appearance of infantry and artillery officers, NCOs, and privates of the time of Charles XII, drawing on a number of studies and articles, and based on extant artifacts, and written and iconographic documents that have survived to our time. The book illustrates both major and minor changes in the cut, style, and adornments of the uniforms of infantry and artillery officers, NCOs, and privates that occurred shortly before or during the war. It also provides detailed insights into the differences between the Carolean uniforms of the "older model" of 1687, which served as the basis for later modifications, and the "younger model" of 1706, as well as into different variations in transitional models existing between the two.

The book also studies the different variations of headgear used by Swedish officers, NCOs, and privates, with a particular focus on grenadier caps, and examines soldiers' accouterments and dress. The uniforms and insignia of Swedish infantry and artillery officers are described in a separate section.

Along with published sources, this book also relies on little-known or previously unpublished documents. The text is accompanied with photos of surviving uniforms, archaeological finds and period artworks, and is richly illustrated with the author's graphic reconstructions of period uniforms.

A full-color section is dedicated to the author's own plates, which show officers, NCOs, and privates of Charles XII's army during the Great Northern War. These eye-catching graphic reconstructions with detailed descriptions will be helpful for historians, artists, reenactors, and filmmakers. They will also be invaluable to those who are fond of historical figurines and to those who create their own tabletop armies to play out historical battles.