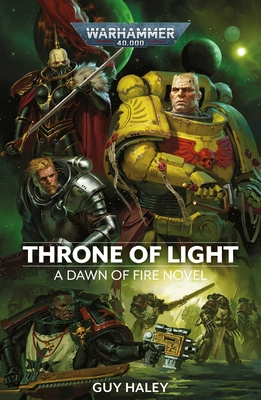 Book 4 in the fantastic Warhammer 40,000 mega-series, Dawn of Fire, from Black Library.

The Indomitus Crusade continues its war across the stars. The primarch Roboute Guilliman has finally broken through the orkish threat bedevilling the sectors near Fenris and makes ready to push on in his bid to stabilise Imperium Sanctus, but old foes have returned.

Kor Phaeron, the Dark Cardinal, threatens the previously stable core of the Segmentum Solar. Waves of rebellion instigated by his evil priests suggest imminent, large-scale invasion by the Word Bearers Legion. Worse yet, the Dark Cardinal’s warriors are targeting the Black Ships, threatening to starve Terra of the psykers the Emperor needs to survive.

Through this turbulent warzone Inquisitor Rostov continues his search for the Hand of Abaddon. Yet when strange, miraculous visions are traced back to the astropathic relay on Srinagar, his quest is diverted, for the visions are a foretelling of hope for the Imperium, a hope the fanatical worshippers of Chaos will do anything to snuff out…
Guy Haley is the author of the Siege of Terra novel The Lost and the Damned, as well as the Horus Heresy novels Titandeath, Wolfsbane and Pharos, and the Primarchs novels Konrad Curze: The Night Haunter, Corax: Lord of Shadows and Perturabo: The Hammer of Olympia. He has also written many Warhammer 40,000 novels, including Belisarius Cawl: The Great Work, Dark Imperium, Dark Imperium: Plague War, The Devastation of Baal, Dante, Darkness in the Blood, Baneblade and Shadowsword. His enthusiasm for all things greenskin has also led him to pen the eponymous Warhammer novel Skarsnik, as well as the End Times novel The Rise of the Horned Rat. He has also written stories set in the Age of Sigmar, included in War Storm, Ghal Maraz and Call of Archaon. He lives in Yorkshire with his wife and son.