Between the Devil and the Deep: One Man's Battle to Beat the Bends (Hardcover) 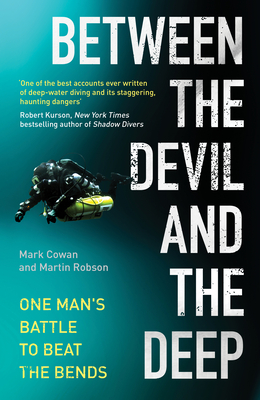 Between the Devil and the Deep: One Man's Battle to Beat the Bends (Hardcover)


In Stock—Click for Locations
"One of the best accounts ever written of deep-water diving and its staggering, haunting dangers." Robert Kurson, New York Times bestselling author of Shadow Divers

Deep underwater lurks a mysterious man-made illness. It has gone by many names over the years --Satan's disease, diver's palsy, the chokes--but today, doctors call it decompression sickness. You know it as the bends.
That's the devil British diver Martin Robson faces each time he plunges beneath the surface.

In the winter of 2012, Robson was part of an expedition to Blue Lake, southern Russia, which sought to find a submerged cave system never seen by the human eye. On the final day of the expedition, as Robson returned from diving deeper into the lake than anyone had before, disaster struck: just seventy-five feet down, he was ambushed by the bends.
Robson knew that if he continued up to the surface he would probably die before help arrived. Instead, he sank back into the water, gambling on an underwater practice most doctors believe is a suicidal act. Soon the only hope he had of saving his life would rest in the hands of a dramatic mercy mission organized at the highest levels of the Russian government.

Between the Devil and the Deep is the first book to tell the terrifying true story of what it feels like to get the bends, taking you inside the body and mind of a man who suffered the unthinkable. Writer Mark Cowan also explores the grimly fascinating history of decompression sickness, the science behind what causes the disease, and the stories of the forgotten divers who pushed the limits of physical endurance to help find a solution.

Mark Cowan is a journalist with more than twenty years' experience in newspapers and television. He spent twelve years on the police beat charting the war on crime, and was also embedded with the British Army in war-torn Kosovo. Cowan has also worked on crime documentaries for the BBC and ITV. Martin Robson is one of the world's leading instructors on technical, cave and rebreather diving. A former Royal Marine Commando, he has been cave diving for more than twenty years, leading explorations and tours of systems in France, North America and Mexico. In 2003, he discovered a new passageway in the Durzon cave, France, more than a mile into the cave and one hundred metres underwater. Only a handful of people have ventured there since.