I'm More Dateable than a Plate of Refried Beans: And Other Romantic Observations (Hardcover) 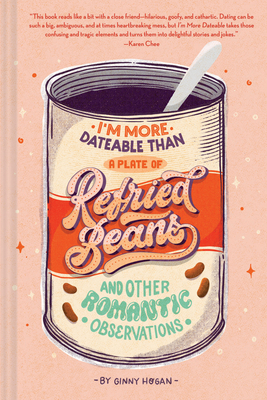 I'm More Dateable than a Plate of Refried Beans: And Other Romantic Observations (Hardcover)


On Our Shelves Now at:
From comedian Ginny Hogan, this laugh-out-loud collection of humor observations explores all the ups and downs of modern romance.

Through hilarious, absurd-yet-relatable short stories, quizzes, over-think pieces, and more, Hogan details every stage of a modern relationship—from meeting on an app to becoming official, to breaking up or getting married, to being single.

Find out how to successfully ignore any and all red flags. Take a quiz to see if that anxiety attack you're having means you're in a new relationship or if it's that cold brew you just chugged. Read chilling tales about the unfortunate few who actually did lose their phones (they didn't mean to ghost you, they promise).

Begging to be shared with friends or sat next to your phone full of Tinder notifications, I'm More Dateable than a Plate Of Refried Beans is the ultimate humor book for anyone who is dating or has ever dated.

LAUGH-OUT-LOUD HUMOR FOR ALL: This hilarious book has a little something for everybody, whether you're single, dating, married, monogamous, polyamorous—you name it!

UNIQUE CONTENT: Full of absurd yet relatable stories, quirky lists, quizzes and more, this is a nice repose to other modern dating books, whose pages try to offer sincere advice. Modern dating is weird and sometimes you just need to commiserate and laugh!

• Anyone who has dated or is dating
• Galentine's day, birthday, and holiday shoppers
• Parents looking for gifts for their tech-savvy Millennial and Gen Z kids
• Fans of How to Date Men when You Hate Men by Blythe Roberson, Notes from the Bathroom Line by Amy Solomon, and No One Asked for This by Cazzie David
Ginny Hogan is an LA-based writer and standup comic. She's a contributor for the New Yorker, the Atlantic, the New York Times, Cosmopolitan, the Observer, McSweeney's, and Vulture. Forbes recently profiled her as a rising satire star, and she was one of Paste's top humorists of 2019.

Ginny performs standup comedy all over the place. She's been seen at The Westside Showdown, The Boston Women in Comedy Festival, San Francisco Sketchfest, the Chicago Women's Funny Festival, the Finger Lakes Festival, and the Park Slope Comedy Festival. She wrote jokes for the 2018 Friar's Club roast of Gloria Allred and has had sketches featured on Comedy Central's digital platform.
“This is the new bible of modern dating. Ginny is hilarious, relatable, and she offers the perfect ratio of tough love to coddling for anyone dealing with the cesspool of modern dating. This book is such a helpful, easy-to-understand guide to the world of dating that it’s almost enough to make me wish I was single again. ALMOST enough. I said “almost,” right?” -Dana Schwartz

“This book reads like a bit with a close friend-hilarious, goofy, and cathartic. Dating can be such a big, ambiguous, and at times heartbreaking mess, but I’m More Dateable takes those confusing and tragic elements and turns them into delightful stories and jokes.” -Karen Chee

“Ginny Hogan has done the nearly impossible: she’s found a fresh, original way to talk about dating. Riotously funny just like its author. Also, I can’t date you if you haven’t read this, so.” -Hannah Einbinder

"I’ve been a fan of Ginny’s Twitter for ages, so when I heard she was writing a book, I just about wet myself. In this book, she makes swiping right, getting ghosted, and being on the hunt for love a little less of a nightmare because at least we got this hilarious book out of it. I would say this is my new bible, but it’s not really, in that I wouldn’t tear pages out of this book to roll joints with." -Whitney Cummings

"Ginny Hogan’s book, I’m More Datable than a Plate of Refried Beans, captures today’s dating world perfectly. We now have a zillion ways of connecting, but we're getting further apart, and love seems to be even more elusive. Ginny turns a sharp eye on all of it and is hilarious, too.”-Andy Richter

"I've never read a dating book like this before. Ginny's honesty, humor, and creativity bring an amazing perspective to the chaos of modern dating."-Hannah Berner

“Ginny Hogan’s sardonic and winning I’m More Datable than a Plate of Refried Beans aims to skewer 21st century dating but ends up plumbing deeper depths.  Besides actually analyzing whether the titular assertion is true (spoiler alert: it is) she mercilessly targets hookups, texting, dating apps, and every awkward permutation of sex. And by absolutely nailing the absurdity of it all in a howlingly funny fashion, she eventually gives the reader an oddly affecting admiration for carrying on in spite of it all.”-Jon Cryer

"A series of self-deprecating, fatalistic essays and deceptively bouncy visual pieces designed for quick, easy consumption and relatable entertainment, not unlike little dates, only way more fulfilling and sillier."