The Art of Alice and Martin Provensen (Hardcover) 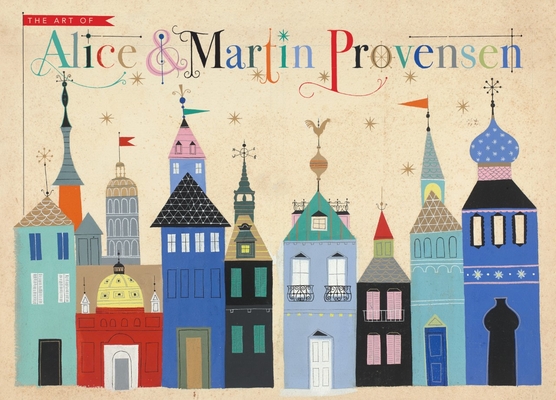 The Art of Alice and Martin Provensen (Hardcover)


On Our Shelves Now at:
The Art of Alice and Martin Provensen is the first-ever monograph on this beloved midcentury husband-and-wife illustration team. This award-winning pair created more than 40 beloved children's books over the span of seven decades, many of which appeared on the New York Times Best Illustrated Books of the Year lists. From early favorites for Golden Books such as The Color Kittens by Margaret Wise Brown, 1949, to their Caldecott-winning title The Glorious Flight: Across the Channel with Louis Bleriot, 1983, the Provensens' books inspired generations of young readers. Original paintings for their beloved classics such as A Child's Garden of Verses, 1951, The Iliad and the Odyssey, 1959, Myths and Legends, 1960 and many others, are beautifully reproduced and included here.

This comprehensive volume showcases hundreds of their well-known illustrations, as well as many never-before-seen paintings, drawings, and exquisite sketchbooks from their travels around the world. An interview with their daughter Karen Provensen Mitchell illuminates their life and career and includes many personal photographs, quotes, speeches, and memorabilia from their archive. An introduction by Leonard S. Marcus, a leading historian in children's literature, underscores the Provensen's importance and influence as illustrators and authors. Additionally, noted publisher and close family friend Robert Gottlieb, provides a personal essay that shares many of his memories with this cherished couple.

The Provensens' colorful, inimitable artwork is a treasure trove that has influenced generations of children, designers, illustrators, historians, and all who cherish classic children's books.
Alice Provensen (1917–2018) first started her career at Walter Lantz Studio, the creators of Woody Woodpecker.

Martin Provensen (1916–1987) began his career as an animator at the Walt Disney Studio, where he worked on classics like Dumbo, Fantasia, and Pinocchio.
“Prolific illustrators Alice and Martin Provensen influenced generations of young readers and midcentury designers through their visual storytelling.” —Publishers Weekly

“The Art of Alice and Martin Provensen feels rescued from a fairy tale sea or an enchanted castle flooded by a spell. Its contents include never-before-seen paintings—as well as family photos, sketchbooks, memorabilia, speeches and personal appreciations that document the life and work of a couple whom you might think you don’t know. But you do. Together, from the late 1940s to the late 1980s, they created more than 40 children’s books. Alice and Martin Provensen lived inside a picture book as much as picture books lived inside them. The lines the artists drew are indistinguishable from the lines of the world they inhabited.” —The New York Times

“Through their sketchbooks and their illustrations, we get to see the world as the Provensens saw it, and what an enchanting place it was.” —The Wall Street Journal