Saving Freud: The Rescuers Who Brought Him to Freedom (Compact Disc) 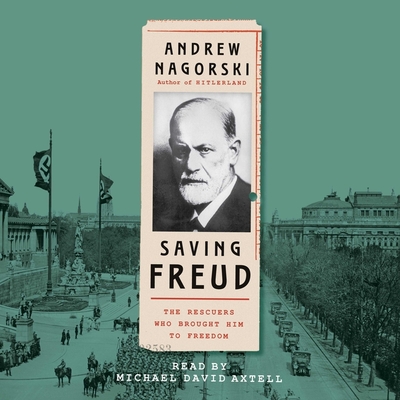 Saving Freud: The Rescuers Who Brought Him to Freedom (Compact Disc)


Not On Our Shelves—Ships in 1-5 Days
A dramatic true story about Sigmund Freud's last-minute escape to London following the German annexation of Austria and the group of friends who made it possible.In March 1938, German soldiers crossed the border into Austria and Hitler absorbed the country into the Third Reich. Anticipating these events, many Jews had fled Austria, but the most famous Austrian Jew remained in Vienna, where he had lived since early childhood. Sigmund Freud was eighty-one years old, ill with cancer, and still unconvinced that his life was in danger. But several prominent people close to Freud thought otherwise, and they began a coordinated effort to persuade Freud to leave his beloved Vienna and emigrate to England. The group included a Welsh physician, Napoleon's great-grandniece, an American ambassador, Freud's devoted youngest daughter Anna, and his personal doctor. Saving Freud is the story of how this remarkable collection of people finally succeeded in coaxing Freud, a man who seemingly knew the human mind better than anyone else, to emerge from his deep state of denial about the looming catastrophe, allowing them to extricate him and his family from Austria so that they could settle in London. There Freud would live out the remaining sixteen months of his life in freedom. This book is both an incisive new biography of Freud and a group biography of the extraordinary friends who saved Freud's life.