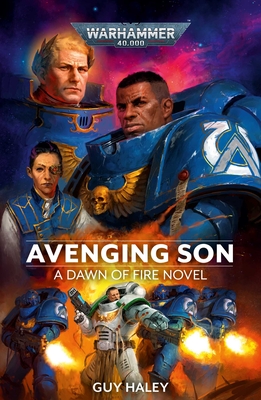 A great darkness has befallen the galaxy, and the armies of Chaos are rampant. To survive, humanity must retaliate and take back what they have lost. By the will of the reborn primarch, Roboute Guilliman, is the Indomitus Crusade launched – a military undertaking that eclipses all others in known history. From the Throneworld of Terra does the Avenging Son hurl his fleets, their mission the very salvation of mankind.

As vessels in their thousands burn through the cold void, the attention of Fleetmistress VanLeskus turns to the Machorta Sound – a region under attack by a dreaded Slaughter Host of the Dark Gods. The success of the Indomitus Crusade will be determined by this conflict, and the desperate mission of Battlegroup Saint Aster, led by Space Marine Lieutenant Messinius. Even then it is but a prelude to the forthcoming bloodshed.

Guy Haley is the author of the Siege of Terra novel The Lost and the Damned, as well as the Horus Heresy novels Titandeath, Wolfsbane and Pharos, and the Primarchs novels Konrad Curze: The Night Haunter, Corax: Lord of Shadows and Perturabo: The Hammer of Olympia. He has also written many Warhammer 40,000 novels, including Belisarius Cawl: The Great Work, Dark Imperium, Dark Imperium: Plague War, The Devastation of Baal, Dante, Darkness in the Blood, Baneblade and Shadowsword. His enthusiasm for all things greenskin has also led him to pen the eponymous Warhammer novel Skarsnik, as well as the End Times novel The Rise of the Horned Rat. He has also written stories set in the Age of Sigmar, included in War Storm, Ghal Maraz and Call of Archaon. He lives in Yorkshire with his wife and son.