Hunting and Trapping on the Upper Magalloway River and Parmachenee Lake: First Winter in the Maine Wilderness (Hardcover) 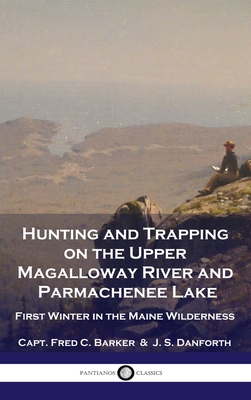 Hunting and Trapping on the Upper Magalloway River and Parmachenee Lake: First Winter in the Maine Wilderness (Hardcover)

This plain-spoken account of two hunters who spent a winter roaming the wilds of Maine in 1877 is a deeply insightful account of the hunting and trapping life.

Quality furs were constantly in demand throughout the 19th century, with pelts from larger animals such as bears highly sought after. Groups of men experienced in the outdoors would venture on expeditions lasting months, trapping and hunting small and large creatures. Barker and Danforth describe surviving in the wilderness for an extended time, often eating the meat from caribou they had hunted, while drying the furs that they be fit for sale. The pair possess skills in crafting a variety of traps and both can handle the rifle - a weapon which revolutionized game hunting.

From the outset, the authors state they wish to present the hunter's life in an unromantic, frank, and unvarnished way. The arduous work of collecting pelts, pursuing game, and keeping themselves fed and sheltered is described, with the landscape and wooded areas of the Maine wilderness baldly accounted for, its rugged beauty rarely acknowledged. Yet a brotherly bond developed between the men, and at the conclusion of the season's hunt they vow to return next year. The final page of this book includes the authors' receipt for the mink, beaver, muskrat and bear furs sold to traders in Boston.