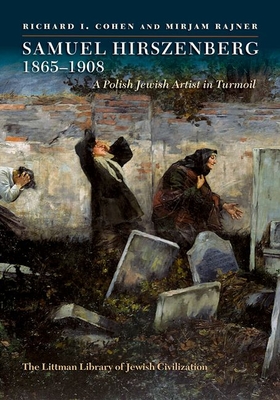 By Richard I. Cohen, Mirjam Rajner


Not On Our Shelves—Ships in 1-5 Days
Samuel Hirszenberg is an artist who deserves to be more widely known: his work intertwined modernism and Jewish themes, and he influenced later artists of Jewish origin. Born into a traditional Jewish family in L dz in 1865, Hirszenberg gradually became attached to Polish culture and language as he pursued his artistic calling. Like Maurycy Gottlieb before him, he studied at the School of Art in Krak w, which was then headed by the master of Polish painting, Jan Matejko. His early interests were to persist with varying degrees of intensity throughout his life: his Polish surroundings, traditional east European Jews, historical themes, the Orient, and the nature of relationships between men and women. He also had a lifelong commitment to landscape painting and portraiture. Hirszenberg's personal circumstances, economic considerations, and historical upheavals took him to different countries, strongly influencing his artistic output. He moved to Jerusalem in 1907 and there, as a secular and acculturated Jew who had adopted the world of humanism and universalism, he strove also to express more personal aspirations and concerns. This fully illustrated study presents an intimate and detailed picture of the artist's development.