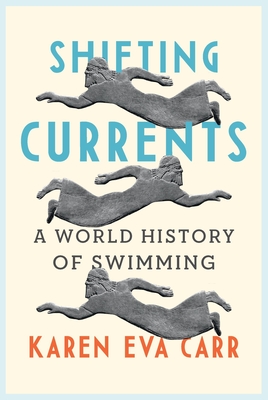 
On Our Shelves Now at:
A deep dive into the history of aquatics that exposes centuries-old tensions of race, gender, and power at the root of many contemporary swimming controversies.

Shifting Currents is an original and comprehensive history of swimming. It examines the tension that arose when non-swimming northerners met African and Southeast Asian swimmers. Using archaeological, textual, and art-historical sources, Karen Eva Carr shows how the water simultaneously attracted and repelled these northerners—swimming seemed uncanny, related to witchcraft and sin. Europeans used Africans’ and Native Americans’ swimming skills to justify enslaving them, but northerners also wanted to claim water’s power for themselves. They imagined that swimming would bring them health and demonstrate their scientific modernity. As Carr reveals, this unresolved tension still sexualizes women’s swimming and marginalizes Black and Indigenous swimmers today. Thus, the history of swimming offers a new lens through which to gain a clearer view of race, gender, and power on a centuries-long scale.
Karen Eva Carr is associate professor emerita in the Department of History at Portland State University. Her books include Vandals to Visigoths: Rural Settlement Patterns in Early Medieval Spain.
"The latest book to dive into the subject of swimming history, as interpreted by historians and journalists, is Shifting Currents, an incredibly well-researched and richly illustrated book. The things that separate Carr’s book from the rest are her background as an expert in classical art and ancient archaeology and her use of art through the ages—from all inhabited continents—to help tell her story. And what a story!"
— Swimming World

"An original and comprehensive history of swimming. . . . A new lens through which to gain a clearer view of race, gender, and power."
— Outdoor Swimmer

"Readers coming to this social history of swimming expecting light-weight beach fare might be surprised by both its scope and the depth of its analysis. Drawing on archaeological, documentary, and visual sources from ancient cultures to the twentieth century, it sketches the ways in which the ability to swim—or, conversely, a suspicious inability to do so—became markers of class, status and moral virtue."
— BBC History Magazine

"Whether examining sea-battle drawings, trial by water for witchcraft, or racial segregation in pools, Carr rarely appears out of her depth. It's a plunge worth taking pictorially too, with an 800BC Assyrian relief showing enemies doggy-paddling in flight across a river; an AD1000 Tibetan temple mural depicting Buddha rescuing a fisherman in distress; and a Bruegel boy using an inflated bladder to keep afloat."
— World of Interiors

"This ambitious work achieves its aims of being a fascinating and highly informative world history, written for the lay reader with an interest in this rich topic, and beautifully illustrated."
— The Conversation

"Using an innovative analysis of archaeological, textual, and art-historical sources, historian Carr traces the shifting nature of the human love and fear of swimming... This meticulously researched, carefully constructed work is dense but fascinating nevertheless and easy to read. Highly recommended."
— Choice

"A fascinating story about swimmers and swimming across the world from antiquity to the present. In exploring the many ways that swimming has served as a marker of cultural and social difference, archaeologist and historian Carr has, in effect, produced a sweeping history of world civilizations from a new vantage point. Swimmers and non-swimmers alike will find much to enjoy in this learned, ambitious, and lively book."
— Nigel Nicholson, Walter Mintz Professor of Greek, Latin, and Ancient Mediterranean Studies and Humanities, Reed College

"All humans can swim, but not everyone makes the effort to learn. Carr’s expansive and engaging volume traces a complex narrative about the 'art' of swimming in world history since the last Ice Age. Carr shows how different cultures organized themselves against each other in relation to swimming practices, from the skilled exploits of Indigenous and African swimmers to the radical immersions of avant-garde Europeans like Byron and Shelley, to modern cultural battles over access to watery spaces from California to Australia to Japan. She demonstrates the recurrence of fundamental cultural anxieties about the water—that it’s too sacred to be polluted by humans, it encourages sexual licentiousness, it’s dangerous, and it promotes racial and class mixing—and shows how these ancient patterns continue in our ambivalently water-focused present. As seas rise in the twenty-first century, we should heed the lessons of this rich history."
— Steve Mentz, St. John’s University, author of "Ocean" and "Shipwreck Modernity"

"Shifting Currents is a must-have for anyone interested in human beings’ long history of swimming. Guiding readers across human experience from the earliest times to the present, from Africa to Europe, Asia, the Americas, Australia, and Oceania (Micronesia, Melanesia, and Polynesia), Carr provides swimming enthusiasts and scholars with a unique, rich, and engaging examination of swimming."
— Kevin Dawson, associate professor of history, University of California, Merced, author of "Undercurrents of Power: Aquatic Culture in the African Diaspora"