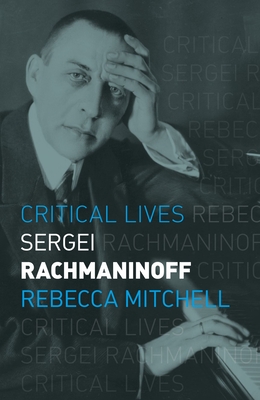 
In Stock—Click for Locations
Drawing extensively on Russian-language sources, a concise yet comprehensive survey of the life and work of one of classical music’s great composers.

Unquestionably one of the most popular composers of classical music, Sergei Rachmaninoff has not always been so admired by critics. Detractors have long perceived Rachmaninoff as part of an outdated Romantic tradition from a bygone Russian world, aloof from the modernist experimentation of more innovative contemporaries such as Igor Stravinsky.

In this new assessment, Rebecca Mitchell resituates Rachmaninoff in the context of his time, bringing together the composer and his music within the remarkably dynamic era in which he lived and worked. Both in Russia and later in America, Rachmaninoff and his music were profoundly modern expressions of life in tune with an uncertain world. This concise yet comprehensive biography will interest general readers as well as those more familiar with this giant of Russian classical music.
Rebecca Mitchell is associate professor of history at Middlebury College in Vermont. She is the author of Nietzsche’s Orphans: Music, Metaphysics and the Twilight of the Russian Empire.
"An admirably concise new biography."
— Boston Globe

"A new critical and scholarly study of Rachmaninoff has been long overdue, and Mitchell's compact but well-researched book is an important step forwards. Drawing on a wealth of sources, she follows Rachmaninov's journey from his childhood in a broken family home to his death in his Beverly Hills house a few days before his seventieth birthday. Along the way, she offers much-needed nuances to some of the hoariest myths associated with the composer."
— Gramophone

“This is a vivid and original portrait of one of the twentieth century’s most beloved composers. Rachmaninoff’s music ranks among the most popular of any classical composer, yet it has been snubbed by composers and musicologists alike as somehow out of step with its time. This biography should kickstart the long overdue process of a reassessment and rediscovery of Rachmaninoff’s career.”
— Pauline Fairclough, professor of music, University of Bristol, and author of “Dmitry Shostakovich”

"'Modern, but not modernist' is how Mitchell defines Sergei Rachmaninoff. Composer, conductor, virtuosic performer and celebrity, he was also a market-savvy manager of his own resources, as keen on cutting-edge recording technology as he was on fast cars. Nostalgic? Only when it suited him. To be modern, Mitchell cogently argues, is to take a stand in a world where tradition is forever dissolving."
— Caryl Emerson, Princeton University