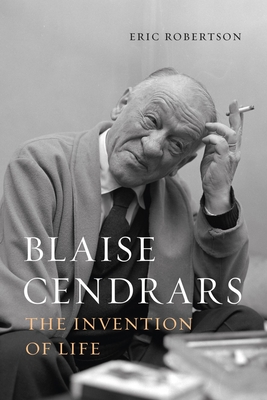 
In Stock—Click for Locations
A new account of the life and work of innovative, pseudonymous French poet, novelist, essayist, and film writer Blaise Cendrars.

In 1912 the young Frédéric-Louis Sauser arrived in France, carrying an experimental poem and a new identity. Blaise Cendrars was born. Over the next half-century, Cendrars wrote innovative poems, novels, essays, film scripts, and autobiographical prose. His groundbreaking books and collaborations with artists such as Sonia Delaunay and Fernand Léger remain astonishingly modern today. Cendrars’s writings reflect his insatiable curiosity, his vast knowledge, which was largely self-taught, and his love of everyday life.

In this new account, Eric Robertson examines Cendrars’s work against a turbulent historical background and reassesses his contribution to twentieth-century literature. Robertson shows how Cendrars is as relevant today as ever and deserves a wider readership in the English-speaking world.
Eric Robertson is professor of modern French literary and visual culture at Royal Holloway, University of London. He has published widely on the European avant-garde, and his books include Arp: Painter, Poet, Sculptor.
"Blaise Cendrars—the Swiss poet with one arm who was born under the name of Frédéric-Louis Sauser—is an unsung hero of European modernism. Cendrars apparently lost his limb fighting with the French foreign legion during the first world war, one of many colorful details in the life of this little known polymath who collaborated with key artists such as Fernand Léger and Sonia Delaunay. The Invention of Life, a new publication by Eric Robertson, professor at Royal Holloway (University of London), reevaluates this revolutionary writer of the early twentieth century who was plugged into avant-garde art and literature. "
— Art Newspaper

“The book is authoritatively well-informed about Cendrars’s life, the historical background, and relevant literary theories that support the many original and insightful commentaries on his work. It is these very accessible discussions and analyses of individual books that establish this as a valuable contribution to literary scholarship.”
— Andrew Rothwell, professor of French and translation studies, Swansea University

"This well researched look at Blaise Cendrars's life and work is a fascinating delve into the first half of the twentieth century, meeting a host of famous and infamous figures on the way. . . . Reading this book is like getting to know an extraordinary new friend; Cendrars had an amazing appetite for life. He loved travelling, loved new ideas, new ways of expressing human experience. . . . An easy book to get into."
— Connexion