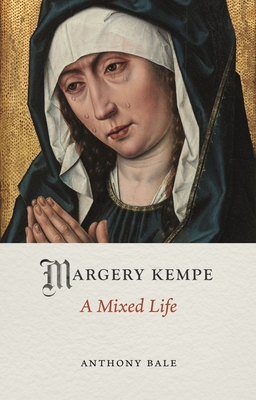 
In Stock—Click for Locations
A fresh account of the medieval mystic, traveling pilgrim, and pioneering memoirist Margery Kempe.

This is a new account of the medieval mystic and pilgrim Margery Kempe. Kempe, who had fourteen children, traveled all over Europe and recorded a series of unusual events and religious visions in her work The Book of Margery Kempe, which is often called the first autobiography in the English language. Anthony Bale charts Kempe’s life and tells her story through the places, relationships, objects, and experiences that influenced her. Extensive quotations from Kempe’s Book accompany generous illustrations, giving a fascinating insight into the life of a medieval woman. Margery Kempe is situated within the religious controversies of her time, and her religious visions and later years put in context. And lastly, Bale tells the extraordinary story of the rediscovery, in the 1930s, of the unique manuscript of her autobiography.
Anthony Bale is professor of medieval studies at Birkbeck, University of London. He has published many articles and books on medieval literature and culture, including The Jew in the Medieval Book: English Antisemitisms 1350–1500 and a translation of The Book of Margery Kempe.
.
"Bale’s biographical study of Margery Kempe is among the first volumes in Reaktion’s new Medieval Lives series. Rich in detail about Kempe’s life and times, Bale’s book includes maps and photographs that enable the reader to follow her progress around the medieval world and even through the streets of modern-day King’s Lynn, where a number of later medieval sites can still be seen today. . . . Capturing Kempe’s complexity in engaging terms, this book is sure to become a staple for all those interested in the literature and culture of medieval England."
— Times Literary Supplement

"A fresh interpretation of Kempe, her book, and her world. The book will intrigue scholars; nonspecialists will find it accessible and interesting... Highly recommended."
— Choice

“Margery Kempe of Lynn Norfolk took pains in the decades of her prime to have her life as mother, wife, and pilgrim recorded for posterity. With erudition and sympathy, Bale frames Margery—a doubting, aching, troubled, and fiercely independent woman—within the European cities that staged her life, and so makes her more familiar than any fifteenth-century woman has ever been.”
— Miri Rubin, Professor of Medieval and Early Modern History, Queen Mary University of London, author of "Cities of Strangers: Making Lives in Medieval Europe"

"Margery Kempe: A Mixed Life is an evocative, vivid, and learned study of a complicated and intriguing text, The Book of Margery Kempe. Bale's captivating study blends rigorously researched biography with incisive analysis of the text. The book combines academic prowess with an almost poetic representation of people, events, and places, and brings to the fore the trials and triumphs of Kempe’s negotiation of her mixed life."
— Laura Kalas, Senior Lecturer in Medieval Literature, Swansea University, author of "Margery Kempe's Spiritual Medicine: Suffering, Transformation and the Life-course"