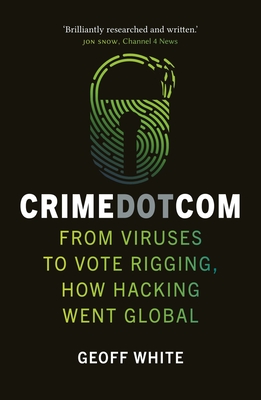 
On Our Shelves Now at:
From Anonymous to the Dark Web, a dizzying account of hacking—past, present, and future.

“A comprehensive and intelligible account of the elusive world of hacking and cybercrime over the last two decades. . . . Lively, insightful, and, often, alarming.”—Ewen MacAskill, Guardian

On May 4, 2000, an email that read “kindly check the attached LOVELETTER” was sent from a computer in the Philippines. Attached was a virus, the Love Bug, and within days it had been circulated across the globe, paralyzing banks, broadcasters, and businesses in its wake, and extending as far as the UK Parliament and, reportedly, the Pentagon. The outbreak presaged a new era of online mayhem: the age of Crime Dot Com. In this book, investigative journalist Geoff White charts the astonishing development of hacking, from its conception in the United States’ hippy tech community in the 1970s, through its childhood among the ruins of the Eastern Bloc, to its coming of age as one of the most dangerous and pervasive threats to our connected world. He takes us inside the workings of real-life cybercrimes, drawing on interviews with those behind the most devastating hacks and revealing how the tactics employed by high-tech crooks to make millions are being harnessed by nation states to target voters, cripple power networks, and even prepare for cyber-war. From Anonymous to the Dark Web, Ashley Madison to election rigging, Crime Dot Com is a thrilling, dizzying, and terrifying account of hacking, past and present, what the future has in store, and how we might protect ourselves from it.
Geoff White is an investigative journalist who has covered technology for numerous outlets, including the BBC and Channel 4 News (UK).
"Journalist White uses the stories of different hacks, dating from the 1980s to the 2016 election, to connect illicit activity on the earliest Internet forums to today's cyberattacks by hacktivists and state-sanctioned hacking teams. He humanizes this history by highlighting the people behind the tech: the Filipino student who unleashed the Love Bug, one of the first global cyberattacks to rely on psychological manipulation; the former cybercriminal who worked with the FBI to bring down Silk Road, a dark Web black market for illegal drugs (a scheme that involved him faking his own death); and the audio producer who lost thousands of dollars in a scam that exploited personal information stolen from telecommunications company TalkTalk. To secure, or 'harden,' systems against cybercrime, White writes, 'it's humans, not necessarily computers, that we need to harden up.'"
— Sophie Bushwick

"In this book, investigative journalist White explores some of the more prominent hacking events of the past two decades. White does an excellent job of covering the hacking events, e.g., the Sony hack, the WannaCry virus, various distributed denial of service (DDOS) attacks, the Edward Snowden leaks, and the Russian involvement in the United States 2016 election. . . . White presents them in such a way as to make them easily understandable for a non-technical reader. Anyone who wants a casual read on how cybercrime affects our contemporary world should take the time to read this monograph. Recommended"
— Choice

"Arguing that cybercrime has grown in power and in danger, journalist White offers a well-written, expertly researched examination of the topic. Relying on published reports and in-depth interviews, the author looks at three different facets: cybercrime gangs, 'hacktivist' movements, and ways in which nation states use cybercrimes. White is at his best when describing this seemingly legally sanctioned hacking, such as in Russia and North Korea. In vivid detail, he explores the 2015 raid on Bangladesh’s Central Bank; the movement Anonymous, which has made attacks on governments; and ways in which data is hacked for profit. . . . This is a fascinating, often gripping read, and a solid update to Brian Krebs’s Spam Nation. . . . For true crime and technology enthusiasts in search of an overview of cybercrime."
— Library Journal

“Beginning with a tour of hacks from the 1980s through to the 2016 election (and a thrilling account of the 2015 Bangladesh Central Bank heist), this is a fascinating primer on the dangers of the cyber underworld, which includes hacktivist movements, cyber gangs, and nation-state attacks.”
— Globe and Mail

"From pig poop to sunscreen to poker to hackers, the books we love dive deep to tell smart stories about how the world works."
— WIRED, "26 of the Most Fascinating Books Read in 2020"

"Crime Dot Com is, at its heart, the story of how cybercrime’s reach, impact, and possibilities, have fundamentally changed as internet speeds and penetration rates have increased around the globe. In that, it achieves its goals with clear and accessible prose, making it a book that will be of interest to those who wish to look back at the patterns of cybercriminal activity and understand its evolution over the course of the early twenty-first century."
— Criminal Law and Criminal Justice Books

“Brilliantly written and researched, Crime Dot Com is a vivid insight into the scale of the threat to us all from crime born of and facilitated by the digital age.”
— Jon Snow, Channel 4 News (UK)

“White offers up a comprehensive and intelligible account of the elusive world of hacking and cybercrime over the last two decades. He ranges from the lone hacktivist to state-sponsored surveillance, from the Love Bug to the Lazarus Group, from Snowden’s revelations to the Huawei controversy. His book is, thankfully, jargon-free, keeping a tight focus on the humans involved rather than the technology. It is lively, insightful and, often, alarming.”
— Ewen MacAskill, former chief political correspondent for the "Guardian"

“White writes with insight and flair about a subject that concerns everyone—or should do. Criminals, hooligans, hostile state actors and terrorists attack our computers and networks every minute of every day. Our money, security and freedom are at risk. Yet the public is still pitifully unaware of the threats we face—and what we need to do to protect ourselves at an individual, business, and government level. Crime Dot Com joins the dots, painting a well-informed, easy-to-understand, and up-to-date picture of the mounting dangers caused by our complacency, greed, and ignorance.”
— Edward Lucas, author of "Deception: Spies, Lies and How Russia Dupes the West"

"White is one of the most authoritative reporters on cybercrime and Crime Dot Com is an informative, accessible, and entertaining tour of the cyber underworld. If you want to understand everything from ransomware to nation-state attacks on key infrastructure this is an excellent primer."
— Rory Cellan-Jones, BBC News