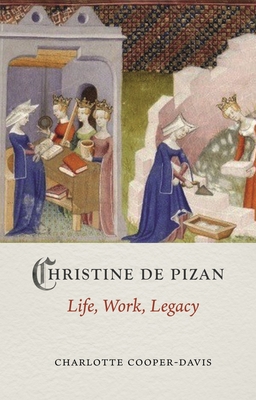 
In Stock—Click for Locations
The first popular biography of a pioneering feminist thinker and writer of medieval Paris.

The daughter of a court intellectual, Christine de Pizan dwelled within the cultural heart of late-medieval Paris. In the face of personal tragedy, she learned the tools of the book trade, writing more than forty works that included poetry, historical and political treatises, and defenses of women. In this new biography—the first written for a general audience—Charlotte Cooper-Davis discusses the life and work of this pioneering female thinker and writer. She shows how Christine de Pizan’s inspiration came from the world around her, situates her as an entrepreneur within the context of her times and place, and finally examines her influence on the most avant-garde of feminist artists, through whom she is slowly making a return into mainstream popular culture.
Charlotte Cooper-Davis is a lecturer in French at the University of Oxford. She is the author of Christine de Pizan: Empowering Women in Text and Image and lives in Cambridgeshire.
"A beautiful biography of a pioneering female French writer. . . . This is a thorough and yet light study designed for general readers, but also likely to help specialists in this field that can benefit from an introductory text before diving further into a study of Christine’s writings. The images throughout are of top-quality."
— Pennsylvania Literary Journal

"This lively account of how Christine de Pizan came to write her famous works in defense of women vividly evokes late medieval Paris as the cultural backdrop against which she was writing and explores how her legacy lives on in modern feminist thought, contemporary art, and even popular culture."
— Rosalind Brown-Grant, professor of late medieval French literature, University of Leeds

"The works of Christine de Pizan, one of the most remarkable women of European literature, remain exciting and urgent in the twenty-first century. In this lively and fascinating account, Cooper-Davis’s meticulous research and vivid prose paint an engaging, detailed picture of not only this talented author, but her social and literary context in medieval Paris."
— Miranda Griffin, lecturer in medieval French, University of Cambridge, and fellow of Murray Edwards College

"Cooper-Davis deftly shows how Christine’s prolific literary career depended on both her access to books and libraries and her first-hand experience in the Parisian book trade, where some of the most luxurious medieval manuscripts were made. Concluding with a look at how Christine’s work currently inspires artists and even animates popular culture, Christine de Pizan: Life, Work, Legacy is a portrait of a medieval woman for the ages."
— Marilynn Desmond, distinguished professor, English and medieval studies, Binghamton University, New York