Klaus: The Art of the Movie (Hardcover) 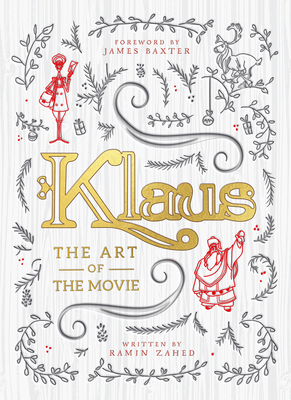 Klaus: The Art of the Movie (Hardcover)

When Jesper (Jason Schwartzman) distinguishes himself as the postal academy's worst student, he is stationed on a frozen island above the Arctic Circle, where the feuding locals hardly exchange words let alone letters. Jesper is about to give up when he finds an ally in local teacher Alva (Rashida Jones), and discovers Klaus (Oscar® winner J.K. Simmons), a mysterious carpenter who lives alone in a cabin full of handmade toys. These unlikely friendships return laughter to Smeerensburg, forging a new legacy of generous neighbors, magical lore and stockings hung by the chimney with care. An animated holiday comedy directed by Despicable Me co-creator Sergio Pablos, KLAUS co-stars Joan Cusack, Will Sasso and Norm Macdonald.

Klaus: The Art of the Movie is a stunning coffee table hardback exploring the art of Sergio Pablos' hand-drawn animated original Christmas film. Showcasing the full animation process, including an innovative new lighting and shadowing technique, this book features concept art, pitch documents, character turnarounds, key art, final artwork, exclusive sketches, and interviews with the team behind this heartwarming film.
Editor in chief of Animation Magazine, and former senior editor at Daily Variety, Zahed has been covering the entertainment industry for over 15 years. As well as writing The Art of The Iron Giant, Home, The Little Prince, Rise of the Guardians, Puss in Boots and The Art of DreamWorks Animation, Zahed has written for the Los Angeles Times, Hollywood Reporter, LA Weekly and Movieline Magazine on film, animation, vfx and TV.
“one of the most interesting art-of books in some time” - Cartoon Brew

“The next level of books on film animation is here” - Borg.com

“I’m a huge fan of this film, but the art book sold it for me...not only a beautiful book, but a promise that animation is going in new and exciting places” 9.5/10 - Adventures in Poor Taste

“Beautifully designed, lovely cover, and great layouts made for a holiday book to treasure” - Borg.com