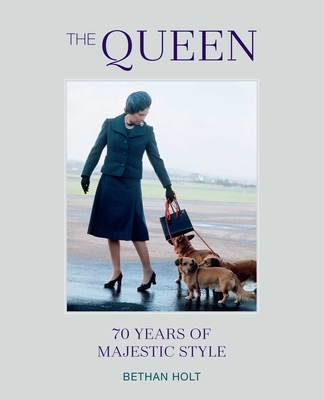 
Special Order—Subject to Availability
The past 70 years have seen a 25-year-old princess transform into a nonagenarian monarch who is respected and loved the world over.

A woman whose views are never heard, Queen Elizabeth II has deployed fashion as a means to communicate and signal her position to the crowds who gather to see her in public and the millions who watch her television broadcasts: “I must be seen to be believed,” she has said. The Queen’s evolving attitude to dress reflects a visual landscape that began as genteel reportage in mostly black and white and has over the years evolved into today’s technicolor 24/7 news cycle, flashed around the globe in seconds and driven by social media. Incredibly, in her 70th year as monarch, the Queen feels as relevant as ever before–and she is, undoubtedly, a style icon. The Queen: 70 Years of Majestic Style celebrates the fashion evolution of Elizabeth II in her unprecedented Platinum Jubilee year.
Bethan Holt is the fashion news and features director at the Telegraph and writing about royal style is her professional obsession. Bethan has appeared on the BBC, Sky, Channel 4, and ITV talking about royal fashion, as well as on numerous podcasts including Royally Obsessed, and was shortlisted for Fashion Journalist of the Year at the 2018 and 2019 Press Awards. Her previous book is The Duchess of Cambridge: A Decade of Modern Royal Style.
This book’s charm extends well beyond its pictures, though it has an impressive collection of the rarest of shots - The Washington Post

A great read; absolutely beautiful - US magazine/Royally US