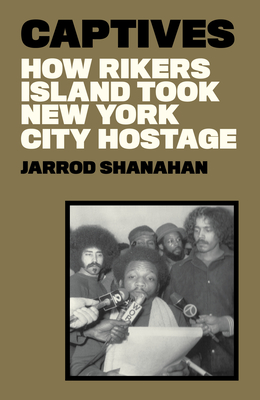 Captives combines a thrilling account of Rikers Island’s descent into infamy with a dramatic retelling of the last seventy years of New York politics from the vantage point of the city’s jails. It is the story of a crowded field of contending powers—city bureaucrats and unions, black power activists and guards, crooked cops and elected leaders—struggling for power and influence, a tale culminating in mass incarceration and the triumph of neoliberalism. It is a riveting chronicle of how the Rikers Island of today—and the social order it represents—came to be.

Conjuring sweeping cinematic vistas, Captives records how the tempo of history was set by bloody and bruising clashes between guards and prisoners, between rank and filers and union bosses, between reformers and reactionaries, and between police officers and virtually everyone else. Written by a one-time Rikers prisoner, Captives draws on extensive archival research, decades of journalism, interviews, prisoner testimonials, and firsthand experience to deliver an urgent intervention into our national discussion about the future of mass incarceration and the call to abolish prisons. The contentious debate about the future of the Rikers Island penal colony rolls onward, and Captives is a must-read for anyone interested in the island and what it represents.

Jarrod Shanahan is a writer, activist, and educator based in Chicago. He works as an Assistant Professor of Criminal Justice at Governors State University in University Park, Illinois, and is the coauthor of States of Incarceration: Rebellion, Reform, and the Future of America’s Punishment System; a co-editor of Treason to Whiteness Is Loyalty to Humanity, a Noel Ignatiev reader; and an editor of Hard Crackers: Chronicles of Everyday Life.

“Rikers Island has the same relationship to New York as his picture did to Dorian Gray in the famous story by Oscar Wilde: the notorious super-jail is the grotesque face of the institutional cruelty and racism that lies behind so much of the Big Apple’s preening dazzle. Shanahan, who personally experienced Rikers’ violence, has crafted a masterpiece of synthesized social observation, analytic history and political critique. Now that the city has a new mayor who loudly champions the jailers and bad cops, Captives is urgent and obligatory reading.”
—Mike Davis, author of City of Quartz and Planet of Slums

“Captives reveals the long history of racial oppression and unaccountable violence in the Rikers Island jail complex that has been hidden in plain sight … This extraordinary book demonstrates the centrality of jails to life in New York City.”
—Matthew Lassiter, author of The Silent Majority

“Captives is more than a history of the notorious Rikers Island; it is a riveting, caged bird’s-eye view of the tumultuous shift from postwar liberal dreams of penal reform to neoliberal punishment, police power, and the rise of the carceral state. Ultimately, it is a book about class struggle—how we got from ‘build better’ to ‘lock ’em up’ to ‘shut it down.’”
—Robin D. G. Kelley, author of Thelonious Monk: The Life and Times of an American Original

“Captives is an important and timely book that vividly depicts how decades of class struggle and oppression, especially along the lines of race and gender, shaped the rise of Rikers Island as we know it today. A must read!”
—Silvia Federici, author of Caliban and the Witch

“Captives is an amazingly detailed journey into a New York City jails system fueled by capitalist greed, political expediency, and racist exploitation. Conditions have deteriorated on Rikers Island even compared to the oppressive and inhumane environment that I experienced detained as a 16-year-old member of the New York Panther 21. Jarrod Shanahan’s incisive history challenges us to thought and action. The longer Rikers stays open and the push for new carceral facilities continues, the longer our collective humanity remains caged.”
—Jamal Joseph, author of Panther Baby: A Life of Rebellion and Reinvention