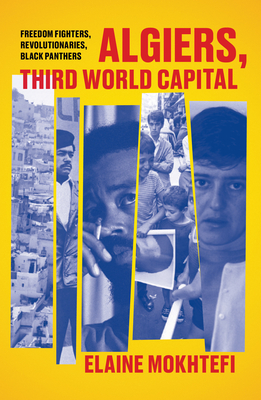 
On Our Shelves Now at:
A fascinating portrait of life with the Black Panthers in Algiers: a story of liberation and radical politics

Following the Algerian war for independence and the defeat of France in 1962, Algiers became the liberation capital of the Third World. Elaine Mokhtefi, a young American woman immersed in the struggle and working with leaders of the Algerian Revolution, found a home here. A journalist and translator, she lived among guerrillas, revolutionaries, exiles, and visionaries, witnessing historical political formations and present at the filming of The Battle of Algiers.

Mokhtefi crossed paths with some of the era’s brightest stars: Frantz Fanon, Stokely Carmichael, Timothy Leary, Ahmed Ben Bella, Jomo Kenyatta, and Eldridge Cleaver. She was instrumental in the establishment of the International Section of the Black Panther Party in Algiers and close at hand as the group became involved in intrigue, murder, and international hijackings. She traveled with the Panthers and organized Cleaver’s clandestine departure for France. Algiers, Third World Capital is an unforgettable story of an era of passion and promise.

Elaine Mokhtefi was born in New York. After the Second World War, she joined the youth movement for world peace and justice, becoming director of a militant student organization. In 1951 she settled in France as a translator and interpreter for international organizations in the new postwar world. In 1960, she joined a small team in New York as part of the Algerian National Liberation Front, lobbying the United Nations in support of the government in exile and working for Algerian independence. When the struggle was won, she made Algeria her home, working as a journalist and translator. She married the Algerian writer and liberation war veteran Mokhtar Mokhtefi, who died in 2015. A painter as well as a writer, she lives in New York.

“Mokhtefi (née Klein), a Jewish American from Long Island, has had an exhilarating life … In the nineteen-sixties, she served as a press adviser to the National Liberation Front in postwar Algiers, before going to work with Eldridge Cleaver, who was wanted in the US for his role in a deadly shoot-out with Oakland police. Half a century later, as an eighty-nine-year-old painter living on the Upper West Side, Mokhtefi still seasons her prose with the argot of revolution.”
—New Yorker

“A fascinating insider’s account of the Black Panthers’ exile in Algiers in the late 1960s and early 1970s. Legendary figures take to the stage in the world capital of the national liberation movements: Ahmed Ben Bella, Frantz Fanon, Eldridge Cleaver. Mokhtefi was a key intermediary between the Panthers and the FLN during her own time in Algiers, and a militant anti-imperialist. This is a clear-eyed, first-hand recollection of the way things fall apart.” —Jeremy Harding, author of Border Vigils

Mokhtefi handles some spectacular material in brisk, modest fashion. The inevitable doubts and conflicts that arise are not agonized over…Mokhtefi focuses less on how her political allegiances developed than on telling, in lively, lucid fashion, what happened and who did what … it [seems] possible that this readiness to minimize herself on the page is related to whatever capacity allows a person, over the years, to participate in politics, navigating the compromises involved.
—Lidija Haas, Harper’s

“The story she tells in her book is one of intrigue, political and otherwise. It is also about a revolution trying to create a government equal to its ideals in the face of very powerful enemies. Mokhtefi writes as a believer in the revolution, but does not hesitate to critique some of the twists and turns it took over the years she was part of the government.”
—Ron Jacobs, CounterPunch

“A return to a time when Algiers was Mecca and the Vatican for revolutionaries. Indeed, at the time Amilcar Cabral said: ‘Muslims go on pilgrimage to Mecca, Christians in the Vatican and national liberation movements in Algiers.’”
—Kader Bakou, Le Soir d'Algerie

“The behind-the-scenes work of post-WWII liberation movements comes to the fore in this gripping memoir from Mokhtefi … she makes palpable the turmoil and fervor of her experience there while sharing unbelievable stories previously known only to their participants.”
—Publishers Weekly

“A memoir of international radical activism, from helping Algeria and Africa shake the yoke of colonialism to helping the Black Panthers establish a revolutionary outpost in exile … A firsthand account of a time when so much seemed up for grabs.”
—Kirkus

“Mokhtefi artfully weaves together these various strands of radical struggle, while enriching our understanding of the Third World with personal anecdotes … this story reminds us that the Third World was not merely a destination. It was also a fabric of people woven together, even if the patchwork was sometimes unexpected, and at other times, imperfectly sewn.”
—Muriam Haleh Davis, Public Books

“A beautifully written account full of fascinating anecdotes of a life totally given to revolutionary causes.”
—Percy Zvomuya, New Frame