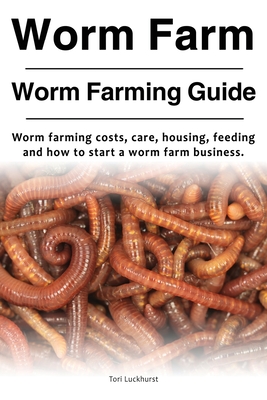 
Not On Our Shelves—Ships in 1-5 Days
(This book cannot be returned.)
Worm farming is the last thing many people will consider. A lot of people don't even know that certain species of worms can be farmed, harvested and sold for profit. Worm farming, especially as a part of organic natural gardening methods, is growing in popularity. It is technically called vermicomposting or vermiculture. I have been into worm farming for many years. I farm worms not just as hobby but also as a source of revenue. It is also a good means through which I manage my organic waste. I share my many years of experience as a worm farmer with you. Indeed, worm farming is interesting and rewarding. However, despite its numerous advantages, it has some drawbacks; the dark side of worm farming. This Worm Farming guide contains helpful information, guidelines and tips for beginners in worm farming. If you have an interest in worm farming, this book is for you. After you've read this book, you will be able to grow and sell worms. This book is an embodiment my many years of experience and research in worm farming. The resources and equipment required for successful worm farming are contained in the book as well. Included in this book: -Beginning a worm farm business -Best location for a worm farm -Children and worm farms -Costs -Difference between worm farming and composting -Dos and Don'ts -Establishing a farm for your worm -Feeding -General concerns and solutions -Getting your worms -How many worms -Introduction to worm farming -Keeping worms safe from predators -Life cycle of worms -Seasonal care -Species of worms -The dark side of worm farming -Worm bins -Worms at a glance .........and much more.