Why Can't You Hear Me?: Our Autistic Daughter's Struggle to Be Understood (Paperback) 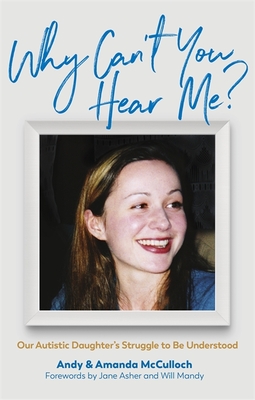 Why Can't You Hear Me?: Our Autistic Daughter's Struggle to Be Understood (Paperback)

In the early hours of 28th July 2016, Colette McCulloch was hit by a lorry and killed on the A1. Eighteen hours earlier she had walked out of the specialist care facility for autistic adults where she was being treated.

Here, Andy and Amanda McCulloch tell the story of their daughter's life and untimely death: the years in which her autism went undiagnosed, her lifelong battle with eating disorders and the lack of support for her complex needs. The book is interspersed with Colette's own vivid and eloquent writing, her poetry and prose articulating her experiences grappling with a world forever at odds with her. Colette's story is a call to action and ultimately leaves a message of hope for a future in which autistic people will be better understood and able to flourish.
Andy and Amanda met while working as actors. They had two daughters, Chloe and five years later Colette. Andy went on to become a TV screenwriter and wrote for many popular series. Amanda became a theatrical agent. Throughout Colette's short life they sought out people to try to explain and ease their younger daughter's extraordinary mind. Since Col's death they've been fighting various authorities to uncover the failings in her care and treatment. Over the last year they have written this book, which includes much of her writing. It was always Colette's dream to have her words published.