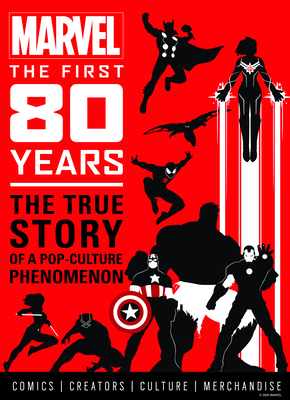 
In Stock—Click for Locations
An in-depth, beautifully illustrated companion book which explores the origins and rich history of the largest comic book publishing company in the world, from the minds of infamous creators such as Stan Lee, Jack Kirby and Steve Ditko - Marvel Comics!

For 80 years, Marvel Comics has inspired millions of fans worldwide with iconic characters and timeless stories that have brought the Marvel Universe to the forefront of contemporary pop culture.

Though now the company is famous for their blockbuster hits such as the Avengers, Guardians of the Galaxy, X-Men, and Spider-Man, this book will explore the company's humble beginnings and it's struggle to become the powerhouse of publishing that it is today. Featuring all-encompassing overviews of the trials and triumphs from each decade, with marvelous milestones, characters, creators, incredible illustrations, and behind-the-scenes trivia.

It's the ultimate love letter to the world's mightiest Super Heroes.
Titan Comics has been publishing licensed comics, books and magazines for over 25 years on such major brands as Doctor Who, Assassin's Creed, Blade Runner, Marvel, Disney, Star Wars and Star Trek.
"Impressively informative ...a 'must read' for the legions of Marvel Comics fans" -Midwest Book Review

“A must-have for any Marvel fan or collector. It is loaded with all kinds of great information and an incredibly helpful timeline that perfectly documents that major points in Marvel’s history” - Laughing Place