The Ledger: Accounting for Failure in Afghanistan (Paperback) 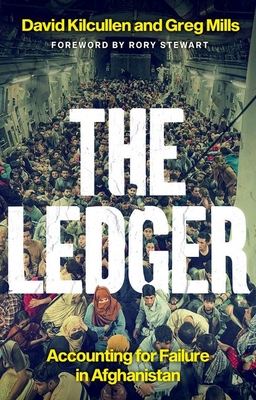 The Ledger: Accounting for Failure in Afghanistan (Paperback)


Not On Our Shelves—Ships in 1-5 Days
(This book cannot be returned.)
'These things happened. They were glorious and they changed the world, ' said Charlie Wilson, of America's role backing the anti-Soviet mujahideen. 'And then we fucked up the endgame.' With no support for Afghanistan after that war, the vacuum was filled by the Taliban and bin Laden. The Ledger
assesses the West's similarly failed approach to Afghanistan after 9/11-in military, diplomatic, political and developmental terms. Dr David Kilcullen and Dr Greg Mills are uniquely placed to reflect backwards and forwards on the Afghan conflict: they worked with the international mission both as advisers and within the Arg, and they have considerable experience of counterinsurgency and stabilization operations elsewhere in the
world. Here these two experts show that there is plenty of blame to go around when explaining the failure to bring peace to Afghanistan after 9/11. The signs of collapse were conveniently ignored, in favor of political narratives of progress and success. Yet for Afghans, the war and its geopolitical effects are not over because NATO is gone-Afghanistan remains globally connected through digital communications and networks. This vital book
explains why and where failings in Afghanistan happened, warning against exceptionalist approaches to future peacebuilding missions around the globe.

David Kilcullen is a bestselling author, a leading researcher in the field of unconventional and guerrilla warfare, and a former professional soldier and diplomat. He is President and CEO of Cordillera Applications Group, a research and development firm in Colorado. A senior counterinsurgencyadviser during the Iraq and Afghanistan wars, his books The Dragons and the Snakes; The Accidental Guerrilla; Out of the Mountains; and Blood Year are all published by Oxford University Press. Greg Mills is director of the Johannesburg-based Brenthurst Foundation. He has advised many Africangovernments and also served in Afghanistan with COMISAF (Commander International Security Assistance Force). His books include Making Africa Work and Why States Recover, both available from Oxford University Press.